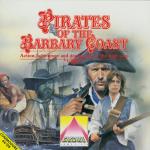 The infamous Bloodthroat the Pirate has kidnapped your daughter and is demanding 50,000 pieces of gold ransom for her. You'll have to decide whether to pay or blast him out of the sea when you get to his island at the end of the game, but first you've got to raise the ransom by trade or more risky ventures.

First stop, the Barbary Coast map which shows you're docked at Casablanca. You're immediately shown a manifest of the gold you have, your food and firepower - calculated in numbers of cannonballs.

The game's controlled by a series of multiple choice menus, some of which have only one choice (?) which you have to press to move to the next part of the game, and an arrow cursor. You sail from port to port by pointing at the destination. You're then given the time it will take to get there and asked if you want to continue to re-select.

Once out of port, you may be attacked by other pirate vessels. You have the choice of fleeing or standing your ground, but if you select the latter you'd better be prepared for some heavy confusion. The cassette inlay describes how to stoke up and fire your cannon, but the instructions are for the Commodore version. It refers to a blue cannon selection panel, which is yellow on the ST, but doesn't show you its position on the screen. So, if you've got the ST version of the game you'll have to work out which panel controls each cannon action.

Before you fire the cannon you have to load it by pointing at the powder in the keg to the right of the gun and ramming one of the cannonballs in. It took me half an hour to work out how that was done. The instructions are unhelpful to say the least!

When you're loaded, select the cannon's elevation and the fire panel. The cannon goes off and, with luck and no help at all from Cascade, you sink the ship. You have fifteen cannons but, if you're unlucky, they'll be knocked out one by one, and if you're mega-unlucky, your ship will sink.

Back at port you've got the opportunity to trade, buy supplies and repair your ship.

The idea is to do what no British Prime Minister has done since the way and make your balance of payments show a profit. It's a slow business - and a tedious one because all you have to do is select from multiple choice menus - but there's no margin for error. Once you've sold stock of a certain product, you don't get the chance to buy more at the same port.

Trading is a slow business, but there is a chance to go for gold, literally a fortune in it.

When you pay a visit to the local port store you can bribe the keeper and he may give you a treasure map, marked with an X. Once you've got that you can make your way to treasure island but, because the same old select menu control system is used throughout, even this section of the game - digging for treasure - isn't particularly exciting.

Cascade has hit on a mediocre game formula. Commodore strategists may enjoy it for a few hours but the ST version, which performs in low-resolution graphics mode, makes a mockery of the 16-bit power.

The company should either have added to the plot and produced hi-res graphics for the ST, or left the game on the Commodore.

A mediocre game formula. Commodore strategists may enjoy it for a few hours but the ST version, which performs in low-resolution graphics mode, makes a mockery of the 16-bit power.