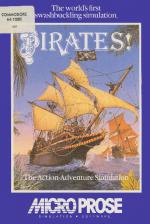 Sail Ho! Cap'n. Jolly Roger off the starboard bow! If these bucanneering words stir your blood, the latest release from Microprose should be of interest. Pirates! follows your fortunes as a Privateer of the 1600's attempting to increase your personal wealth and status.

Before a voyage is undertaken an options screen is displayed allowing the player to begin a new career, load in a saved character or command one of six famous expeditions. All actions are controlled from a series of highlighted option/menu panels.

A new career requires the construction of a character - with the personality built from the following factors: name, nationality, level of play (apprentice, journeyman, adventurer or swashbuckler). A special skill, such as fencing, gunnery or navigation is also chosen.

Your career starts with a duel with the Captain of your current vessel. Winning puts you in charge of the ship whereas defeat puts you afloat in a tiny boat with a handful of fellow mutineers. The action is set in the Caribbean, from Vera Cruz in the West, to Barbados in the Easy, and from Bermuda in the North, to Panama in the South. A map is included in the packaging and features all 57 ports that may be visited.

Your vessel is controlled via the joystick and is directed anywhere within the multi-directionally scrolling map. Winds and distances have to be considered when a destination is chosen - otherwise food or water supplies may expire.

Ports are either friendly, neutral or enemy-held. When your ship nears a port, a menu sheet appears with a series of options which allows you to sneak into port, sail in or even attack it. Entering a port gives you the chance to visit the Governor or a tavern, trade with a merchant or divide up the plunder.

The Governor of the settlement tells of the current situation between nations and may also confer upon you the honours that your efforts have earned, such as a letter of marque for your ship, or even a promotion and a gift of land. A friendly merchant trades with you, allowing plundered goods and unwanted vessels to be sold off.

At sea you are alerted if a ship is sighted, and are then given the option to investigate. If you choose to attack, the two ships are shown on-screen from an overhead viewpoint. The main objective is to come alongside the enemy ship and give a broadside of cannon fire. Repeated blasting reduces the number of men and cannon onboard - of course you also run the risk of having your own ship destroyed.

Touching the enemy ship allows your crew to board her and indulge in hand-to-hand combat. The enemy Captain approaches you for a duel of swords before the ship either falls into your hands, or you are captured and imprisoned.

Note: At the time of going to press, the cassette version of Pirates was not yet released. Therefore, the ratings at the bottom of the page relate to the disk version only. We'll bring you a separate set of ratings as soon as we receive a copy of the game on cassette.

Though Pirates is initially impressive, I found that after a while I was just constantly repeating myself. Sailing into port, trading, talking, leaving port... only the odd attack broke up the action.

It's annoying to keep being rescued by your 'mates', as it means there's no real end to the game - you can just go on and on.

There's plenty of accurate history, but the problem is that the gameplay is only mildly challenging, and eventually becomes repetitive. When you consider what else you can buy for £20, Pirates seems to be very much overpriced.

This is one of the first games where I've really wished my character would die. If you get off to a bad start, you can stay in a rut and keep sailing around for hours, getting caught and being rescued without getting anywhere.

It's a shame that there isn't more of an emphasis on developing a character. Gaining property is fine, but morale and physical abilities remain unaffected throughout - even if imprisoned or victorious. It would have been great if you could build up a character along those parameters and the 'life' 'lived' until either retirement or death - like a pilot in Gunship.

Pirates has plenty of historic content, and hours and hours of play if you're willing to persevere - but whether or not it's worth £20 is a matter between you and your wallet.

Microprose have released a very commendable attempt at an interactive program, but unfortnately it doesn't play half as well as expected, and for all the complexity and depth it actually presents very little challenge.

It's impossible to die - you can end up in a dungeon, or as a castaway on an island, but eventually you are released to continue your career. This is annoying, because there's no risk involved and therefore no challenge as you can never lose. For all the available choices there are only twelve or so that actually physically affect the gameplay.

I found this to be too restrictive and limiting, especially when in combat or when owning more than one ship. For all my niggling, I did have several hours of enjoyable play from Pirates, but then I didn't have to pay £20 for the privilege.

Presentation 84%
Superb packaging, and easy to use, if occasionally flawed, menu system.

Hookability 78%
A few cursory glances of the instruction manual and you're under sail.

Lastability 61%
Plenty of missions and hidden quests, but the gameplay lacks substance.

Overall 68%
A rather disappointing release which fails to capture the imagination in the same way that Defender Of The Crown did.

A rather disappointing release... It fails to capture the imagination in the same way that Defender Of The Crown did.