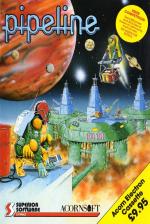 Take Codename: Droid and Ravenskull, and you get Pipeline. It's set on Io, Jupiter's fiery moon, where you must collect sulphur drums from the disaster-struck mines. The game is an arcade adventure - Ravenskull-style - written by two 15 year olds, Ian Holmes and William Reeve.

Loading the game was a slight problem on my BBC B. Only when I stripped my machine of every ROM except BASIC and DFS did it run.

Once down the mines, you stroll around collecting sulphur, avoiding monsters and fires. You can pick up objects for use, throw or drop them.

To complete the game, you must execute a mission, a bit like DROID. Each level is pretty large, and could take a long time to finish. Of course there are also the famous pipes to contend with. Once you enter a pipe you have reached the point of no return, and you are whisked along a pre-defined course and deposited at the other end - a bit like Repton's transporters but more 'graphic'. Pipeline incorporates a mass of puzzles to grapple with, including teleports, remote control units and 'space burgers' - a puzzle in itself. Finally, you must find the control robot (the finishing sprite) and pick it up.

Pipeline has the facility to redesign almost everything. You design the sprites, the keys, the screens, the mission, even the puzzles. The level designer is extremely comprehensive, allowing an enormous number of flags to be set per puzzle. So, you could set up a puzzle wherein you can't reach a crucial 'collectable' until you've found the Joavian wine and used it to put out the fire near the door! But you can't tell whether your puzzles work until you've entered the game - a process taking a fair amount of time, too many loading screens and four disc changes.

Graphically, Pipeline is good. There are two things that let the game down - only slightly. Firstly, the sound is only adequate and secondly, the company appears to have been a bit tight-fisted over the instruction sheet. Pipeline requires you to read a lot of small print. I'm sure a small booklet could resolve the problem.

There's no doubt in my mind that Pipeline is a great game. I recommend you rush out and buy it immediately.

This is a great game... I recommend you rush out and buy it immediately.