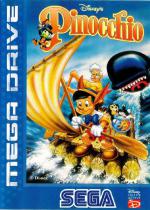 He's the little wooden guy with the floppy quiff. His dad's the elderly toymaker and his best mate is a talking grasshopper. Yes, it's Pinocchio and it's Disney time on the Megadrive again.

In this new slab of celluloid-inspired platform fun, our wooden hero's adventures closely follow the plot of the film. Which, incredibly, no-one round here seems to have seen! But he goes to school, has some underwater fun, visits the funfair and gets swallowed by a whale. All sounds fairly plausible to us.

Each level is linked by a storybook detailing Pinocchio's adventures as he runs away from home and tries to avoid getting shredded into match wood by various ne'erdowells. Altogether now... "When you wish upon a star, makes no difference who you are..."

As well as a mixed bag of game styles, there are a couple of really unusual levels - one where you control Jiminy Cricket and have to use your umbrella to swat marauding moths, and another where Pinocchio is the star attraction in a little theatre.

You can only progress to the next level by exactly copying the moves of your various partners, whether they be ballet dancers or whirling Cossacks. Succeed and you'll get a round of applause - fail and you'll get pelted with tomatoes!

Yes, we've seen it all before, yes, it's unbearably cute, no, there's absolutely no need to machine gun anything whatsoever.

Right, now we've got all that out of the way, what's Pinocchio actually like? It looks very bright and tidy, and the principal characters are faithful and cheeky representations of their on-screen counterparts.

The game design varies from the innovative (the little dance sequences set in the theatre are very original, if a bit frustrating!) to the over-familiar. The only people likely to find this appealing are exactly the audience it's aimed at - junior gamers who are fond of the film. They won't be disappointed.

I'm afraid I don't feel quite as forgiving towards Pinocchio as Marcus does. While it's hardly an offensive piece of software, I'm sick of seeing my favourite Disney movies turned into average platform romps.

There are some nice touches, such as the game following the movie's plot, and being able to control Jiminy Cricket on one level, but I wouldn't have it in the house!

While I can accept that this game is aimed at younger audiences, I can't really believe that anyone buying a new full price Megadrive game would choose this over Sonic 3D. Sorry.

Graphics 82%
The characters look great, but the backgrounds are sometimes a bit bland.

Effects 75%
Nothing to speak of - but it's not really that kind of game.

Animation 84%
Pinocchio and Jiminy bounce around the screen in impressive detail.

Overall 82%
A modest platformer with only a few nice touches - fun for fans.

Another of Disney's average platform romps... The only people likely to find this appealing are junior gamers who are fond of the film.