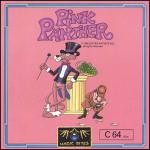 Old Pinky is at a bit of a 'financial disadvantage'. Oh, all right then he's skint! His problem is that he's got long arms and shallow pockets - in other words he likes to spend money. He enjoys luxurious living but doesn't have the means to live the kind of life he enjoys.

To allay this situation he must find a job. Now what kind of job would net him the most money... Ah ha! That's it! A butler. That way he can... er... 'help himself' to a few things while the master is asleep. After purchasing the correct items to pass the interview, Pink starts work at the first house. Unfortunately, the master is a sleepwalker, so Pink must guide him through the house stopping him from bumping into things, otherwise he'll wake up to discover our hero 'on the rob'.

However, that wily old Panther has a few tricks up his sleeve. He can ring a bell to steer the sleepwalker, catapult him around objects and even inflate things. Even more unfortunately, the law (or lier, as it is pronounced) don't like his nicking habits and send Inspector Clouseau to try and nab him.

You take the part of the Pink hero during his nocturnal wanderings, trying to keep the sleepwalker from waking up whilst helping yourself to his goodies. Can you steal enough to afford a holiday in the sun? Can you be bothered?

Bleuch! If anyone can think of a worse cartoon licence than this I'll eat my hat! Ha! Fooled you - I haven't got a hat. And if you think that joke was awful, wait till you see this game. Talk about awkward control methods - you've got about two seconds to perform six split-second moves and if you fail, kaput! Then it's right back to the beginning for one of the most pointless starting sequences ever - wait for it... buying a top hat. Good, eh?

As for the music - really long nails scratching down a blackboard have just about the same effect on my lobes. Still, I've found a foolproof method of winning the game: just bypass the mansion and go straight to the island. The program lets you enjoy your holiday just the same...

To be honest, the only interesting thing about Pink Panther is the coloured cassette shell! The game itself is tedious beyond belief, with long delays between turns, boring graphics, dirge-like music and frustrating gameplay: it looks like Gremlin have backed a right loser!

The main sprite looks a *bit* like the Pink hero he's supposed to depict but the rest of the graphics are awful, being poorly designed and gruesomely coloured. I don't know *what* the music programmer was on when he did the game theme but I don't think it was this planet.

But the gameplay, what about that? Well, 'frustratingly difficult' about sums it up, along with 'very boring'. Oh, by the way, it's cassette-multiload. Uuueeergh!!!

Graphics 25%
Average main sprite but everything else is crap.

Sound 9%
The Pink Panther theme has been massacred (sniff).

Hookability 16%
You do have to look to see what the graphics are like.

Lastability 3%
Play it twice and you'll never play it again.

Overall 14%
Aren't gremlins supposed to cock things up? Well, they've cocked this up!

Average main sprite but everything else is crap. Poor multi-load, annoying delays and few options.