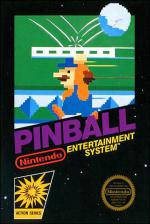 Faster than a speeding bullet the ball is hammered from its launch position and into the three-screened pinball machine.

The ball, shot into space by the control pad's A or B button and its velocity is determined by the length of time you hold the control down.

The main area of the machine is divided into two sections, both of which have a pair of flippers at the bottom of the screen. Left is flipped with the control pad while the right is moved with either the A or B button. The latter part of the set up can cause confusion at the start of the game when those two buttons have different meanings and a short mental control leap has to be made before you get into the game.

Although you only have two sets of paddles - there are no single paddles in this game - the lack of control or involvement is made up for by the crowded point-scoring features. There are two sets of numbered targets, cards that'll flip over if you hit them, and four 100 points bumpers. On screen Bat the bottom of the table, small chicks are hatched from eggs when the ball hits. In screen A, at the top of the table, you can knock over penguines and balancing seals.

Scene C holds the bonus features, which you can only reach if the ball has the good fortune to pop into a hole at the bottom right of the A screen. Instead of flippers you've got Mario, of Mario Brothers fame, in control. He holds a platform which'll catch the falling balls and bounce them back up the screen if you manage to walk Mario under them in time.

The bonus screen also includes a 3 x 4 matrix of coloured, numeric lamps which change colour as the ball bounces between Mario and the two 100 point bumpers on left and right. If you manage to turn the lamps on in the same colour, a lady at the top of the screen will drop into peril, which means extra points for you. Eventually that gap becomes too big to jump and she'll fall, at which point you move Mario under her and when he catches her you get a bonus 10,000 points.

If you're a pinball fan you won't see the new features which are appearing on the latest coin-op games but, if you can't afford one of those in your hall, Nintendo's ball blazer provides an excellent alternative.