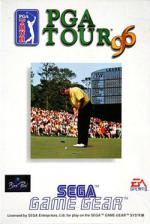 There is only so much you can say about golf games to make them sound interesting. And there are even less jokes you can make about golf games after the bog-standard balls gags, and digs at Nick Faldo having all the charisma of John Major. The truth is that there isn't much left to shout about. But, in time-honoured tradition, we at Mean Machines have braved the elements to bring you yet another Game Gear review (two in two months, pass me the oxygen mask - Gus), and this time it's PGA Tour '96 under the spotlight.

It is a basic conversion from the Megadrive game and sticks to the elements that made the other games such a success. The swing meter, overheads, and view switch are all basic versions of the Megadrive counterparts, toned down a bit to incorporate the drastically reduced memory capacity of the Game Gear. The three courses seen on the Megadrive version remain, however: TPC Summerlin, TPC at Sawgrass (the old grandpa of the courses) and TPC at River Highlands. All of the game styles are here as well - practise whole rounds of just driving and putting, as well as playing tournament or skins challenges.

One of the changeable options is the ability to turn the switch view on and off. This was one of the standard parts of the Megadrive game, and added that little bit more realism when the view switched to the back of the green facing the way your shot has just come from.

You could watch as your ball trickled its way towards the hole. The same option is available here as well, but not quite in the same manner. The view does change, but only moves up to the final 30 or so yards of your shot, and facing the same way you hit from.

PGA Tour '96 is at the top of the tree when it comes to Megadrive golf games. Nothing can come close to it in terms of playability or anything else for that matter.

Game Gear PGA Tour '96 is good, but doesn't scale the heady heights of its older, big brother. The problem is mainly that the Game Gear just can't cope with the graphical touches that need to be included to make the game what it is, hence the awfully slow loading time for every little section.

It takes an eternity to load up holes, and if you do switch on the View Change option, it takes even longer to finish drawing the backgrounds and hole details.

But generally, forgetting the slow sections, it is a good game, with a surprising three courses and lots of variants to just playing a tournament. Worth investing in - if you're a big fan.

This is so faithful to last year's superb Megadrive version that there's little more to say about this pocket-sized putter. As far as Game Gear golf goes, this is surely the last work, only noticeably suffering by accentuating the Megadrive game's worth fault - its sluggishness.

While the slow landscape generation is familiar from this game's big brother, this additionally suffers from putting sequences that are so slow that you're left wondering whether the ball has stopped or not. Despite this, PGA Tour '96 is an impressive enough Game Gear achievement to warrant a definite thumbs-up.

Graphics 82%
Quite close to the originals, considering it's the Game Gear.

Animation 85%
Fluid on the golfer himself, and he actually looks like he is hitting the ball.

Playability 81%
Does warrant some play time, and mastering courses may take a while.

Lastability 82%
Three courses and all the play modes are plus points.

Overall 80%
A good attempt at a golf game, and probably the best you'll get on the Game Gear.

A definite thumbs-up... A good attempt at a golf game, and probably the best you'll get on the Game Gear.