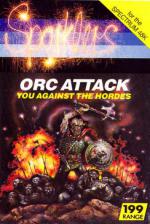 This new release for Thorn EMI under their new imprint, Creative Sparks, is a clever reworking of the 'Siege' theme. The fearsome army of Orcs besieging your castle, are now mounting a frontal attack. Your weapons are rocks, swords and boiling oil. The screen shows the walls of the castle with its battlements and you at the top. In either top corner is a symbol identifying the type of weapon available, and to the corners you go to collect them.

In the first stage, a large force of orcs start mounting ladders to climb up and you may hurl rocks down at them. These must be thrown between the battlements, so it is made difficult by the fact that the ladders are often placed in a position where you can't throw rocks down easily.

As soon as the ladders are erected, the orcs start climbing. Others at the base of the wall fire cross bow bolts at you. When an orc reaches the top, your weapon automatically changes to a sword and you can swipe away at them.

The orcs hammer at the battlements, eroding them. If you are hit (in the eye), you lose a life and have to get another weapon. These are not unlimited. Boiling oil (when it's ready) may be poured down on the attackers, causing a conflagration that destroys all.

When this is done, the evil sorcerer sends his spells up the wall, and these skull shaped things may be bombed by rocks. This returns you to another orc and ladder attack. Surviving this will lead to an attack by giant trolls who appear in thin air, and then come the Stone Warts, who again try to scale the wall under your hail of rocks.

At first glance, Orc Attack looks a bit simple - how wrong can you be! The animated detail is amazing. As they march on, the army of Orcs are all doing different things, loading cross bows, firing, building ladders, climbing them and so on. There can be as many as fifteen at a time, all trying to get you. You are nicely animated too, and an arrow in the eye looks really painful!

Orc Attack is really quite original, and owes nothing to any game I've ever seen. It's very playable, very addictive and well made. I would definitely recommend it.

Another unique game from Thorn EMI with some fantastic animation. At first impression it didn't seem very addictive or very playable, but it turns out to be quite the opposite. The game is very fast and busy. Excellent graphics and use of colour. I can guarantee you'll get some laughs out of this game. Highly recommended by me!

Excellent graphics and use of colour. I can guarantee you'll get some laughs out of this game.