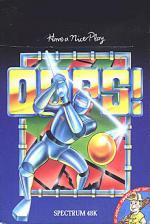 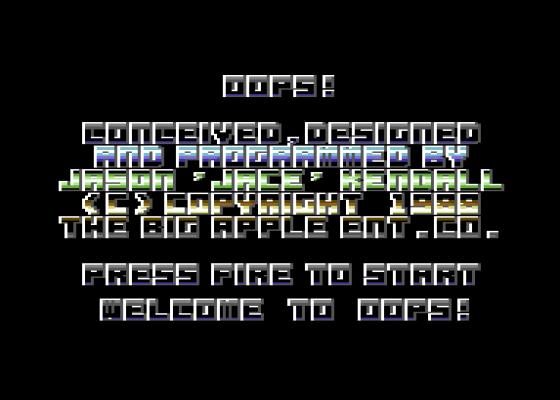 Oops! is the first release from new boys Big Apple - don't there seem to be a whole crowd of publishing houses opening up about now? - and I'm pleased to be able to report that it's a goodie.

The only problem with Oops!, if anything, is that it is too hard. The odds really are quite badly stacked against you, which is a strength in a good game since it remains a challenge no matter how much you like to play it, but a real turn off if it has little else to offer. Oops! grabs you from the word go, and even if it lacks the cute animated characters that made Bubble Bobble or Pac-Man or other chasing-round-a-maze games so appealing, it retains exactly the same sort of strategical challenge.

Basically this is your finding your way safely around a grid problem. Apparently you are meant to be a droid chasing around something or other looking for vital gravity pods, of which you have to collect eight before you can move onto the next screen.

In reality you look a bit more like one wibbly shape rushing around after a second wibbly shape, but I guess you have to have a bit of imagination for these things. In the space between the blocks that you walk along, a rather lovely and very confusing riot of colour and shapes swirls around, making it very difficult to concentrate on just where you are. In addition, an orange ball bounces around the screen like a refugee from Breakout, and if you continue in the same direction for any length of time two bolts that hover at the sides of the screen whizz out to zap you.

Sounds bad enough, doesn't it, but I've neglected to mention the squares that crack when you travel over them, ready to drop you in the drink, and the booby trapped blocks that "push" you in a certain direction when you pass over them, sometimes landing you exactly where you don't want to be.

The thing about Oops! is that it is fiendishly difficult, but also, happily, fiendishly addictive. For a start, you are only given a mere handful of lives which means that, for the first few days playing, you are very unlikely to eat far into the 32 screens at all. With the deliberately confusing background making your eyes go funny - you'd feel a bit shaky after a long session at this I can tell you! - keeping a track on your little moving shape is a problem, especially when you are at the same time trying to work out the safest route to grabbing a gravity pod.

There are plenty of screens where things are laid out there is only one route you can take, and that is often confused by having a disappearing block that takes good timing to pass over, transporters that frustratingly push you back to where you came from, and a whole passle of other nasties. Screen Four, for example, is bloody hard in this way.

I've spent a fair amount of this review simply describing what happens in the game, which is necessary I think because there is such a lot to get a grip on. Basically though, once you play the thing it all becomes abundantly clear, and in purely abstract terms is one of the best strategy/maze games I've seen. I think it could have done with some cute character to bring it all to life.

In purely abstract terms, this is one of the best strategy/maze games I've seen.