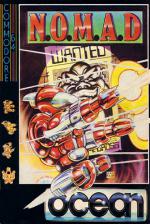 There's a world residing way out in the infinite reaches of space. A world called Talos, where the Intergalactic Criminal Network is based. Talos isn't really a world, it's more of an artificially constructed planet which slowly beetles about the galaxy spreading unspeakable evil. Talos is headed up by one Cyrus T Gross, a very nasty piece of work who insists on being a bit of a pain in the rear. You know the sort, a fist of iron and heart of ice - a bit like a traffic warden really. He's just so mean, no law enforcement agency has managed to convict him yet. You just try going up to him and saying, "Hey there, Mr Gross, you're nicked". He'll just blast your head off, he's that sort of chap, ie: not nice.

In a last and ever-so-desperate attempt to rid the universe of Gross, the free worlds employed the Nemesis organisation to give a helping hand. It just so happens they have this gleaming new robot who should be able to help out. This robot is called Nemesis Organisation Mobile Attack Droid - NOMAD for short - and is controlled by a relay computer back at base. You play the operator of this machine and your mission is to guide NOMAD through the four separate sections of the artificial world towards Gross' inner sanctum.

The game begins when NOMAD arrives at the entrance of the spaceport. He must then progress through the slums and into the city centre to the HQ centre, before having a final deadly confrontation with Gross.

The place is full of dangers, but luckily NOMAD has come well equipped, what with his twin thrusters and heat seeking missiles for maximum speed and fire power. NOMAD can move forwards and backwards; to move him in any other direction he has to be rotated.

Some sections of the maze are blocked by doors, which can only be opened by skimming NOMAD over a switch which normally resides a few screens away. The maze itself is infested with all kinds of horrid nasties which hide themselves in the wall cavities and fire at intervals in one direction.

An on-screen display gives a complete status of your game, showing the high score, current score, and number of lives remaining (NOMAD begins with four).

NOMAD doesn't look very impressive or play very well. There's little variety, and it rarely deviates from being slow and uninteresting. Fred Gray's soundtrack is lively and pleasant, and as such it doesn't suit the game. NOMAD would make a passable budget title, but for nine quid it represents poor value.

Look, I'm getting a bit peeved with all this saving the universe lark. Why can't we go around blasting all the do-gooders for a change? NOMAD is no different - yet another life endangering mission against a bunch of psychopathic meanies.

The graphics are pretty and the sound is quite jolly, but I have a particular dislike of the method of control. All this 'turn to the appropriate direction and then trundle forward' stuff - Yukkypool!

NOMAD might prove interesting for some, but it doesn't really get my seal of approval.

Lastability 68%
Plenty of screens to explore, but not much variety.

Value For Money 66%
Not a lot of game for your money.

A run-of-the-mill arcade game. Plenty of screens to explore, but not much variety.