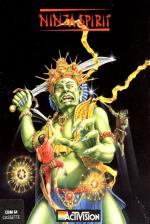 After the defeat of so many demons by superfast ninjas, you'd think they'd learn their lesson and reform. I mean, think of the cash a demon could make using his hordes of minions to do repetitive tasks, like building TVs, hi-fis and even Nintendos!

But no, the Last Warlock isn't interested in your cash, he wants your soul and his evil reign is terrorising another obscure Japanese province. The only one who can save the disaster-prone Japanese people this time is Tsukikage, the spirit of the white wolf. He has taken the form of a ninja and embarks on a dramatic quest through six lands, slaying zillions of minions and plenty of huge super-monsters such as a Flying Kiteman, giant swordman, and massive evil buddha.

The legendary adventure begins in a decaying temple, with evil ninjas crouching on platforms above the ground and hurling bottles of poison gas. There's also plenty of sword-wielding friends to rush Tsukikage. Besides the inevitable, razor-sharp samurai sword our hero is armed with ninja deathstars (or shuriken), dynamite, and lassoon blades - swirling blades on a chain which can be thrown to deadly effect. Tsk - as he's known to his friends - can also make use of crystals dropped by dying ninjas to get ninja spirits (which copy his every lethal move), triple the number of deathstars thrown, envelope the sword in a lethal energy field, and more besides.

All these, and plenty of skill will be needed on later levels, which include a haunted forest, spirit-infested marshes, a massive warehouse with a trapdoor which takes you underground, a vertical cliff face with ninjas lurking in every nook and cranny, as well as caves where ancient old men with twirling sticks leap into the air to make hair-raising attacks.

This is one fast and furious game with enemies zooming onto the screen from all angles - I haven't had so much thrown at me since I was booed off stage at the school nativity play! And it isn't just their huge quantity that makes the nasties dangerous. They behave very intelligently, homing in on you and accurately firing bullets and swinging their swords. Indeed, when I played an early version of Ninja Spirits I thought it was too tough, so thankfully the finished version is slightly tamer, and a lot more playable as a result. That's not to say it's easy, however, as at times it's hard to think quickly enough with so many enemies attacking from all sides.

Graphically the game is a bit of a mixed bag. The scenery's a bit basic in places but the enemy sprites, although small, more than make up for this with superb animation as they leap about, swinging their swords realistically. And their speed is amazing considering there's always so much happening on screen.

I know the subject matter's a bit jaded but, all in all I rate this the most playable ninja game to date. Another top-notch conversion by the inimitable Chris Butler.

Apparently, Chris Butler took on Power Drift purely because he wanted to get his hands on this Irem coin-op, which is very much in the style of his superb Ghosts 'N Goblins conversion. Technically this is quite impressive, with an amazing amount of ninjas and deathstars bouncing around the screen. The way the game switches from horizontal to vertical scrolling is pretty slick as well. The graphics are a bit of hotch potch: the sprites are great but level two is very disappointing for its sparse backgrounds. Level three compensates though, with some superbly shaded trees and baddies.

To some extend I think Chris was handicapped by the original coin-op, which isn't in the same league as Ghouls 'N Ghosts, but his formidable talents have not only produced a great conversion, but a really good C64 game. Some people, me included, might find the extremely hectic pace and tough difficulty level initially a bit off-putting, it doesn't just let up!

This is the hardest game I've played this issue, and while this might seem unfair it's a part of it that forces you to learn those patterns. Persistence reveals some fine gameplay, the multiple ninjas work well and if you want a real arcade test this fits the bill.

Why everyone has to make games about short little oriental guys with shiny swords rather than massive, death-dealing alien dictators such as myself is a bit odd - and usually boring with so many crowding the shelves. But Ninja Spirits is different.

The original Irem coin-op showed some welcome imagination in equipping Tsk with a fair few weapons, allowing you to slice-'n-dice your opponents in a pleasingly varied number of ways. There's also plenty of different backgrounds, from the ruined temple - with its superbly detailed statues - to the spooky forest and demanding vertical cliff face. After the incredible tedium of ninjas stomping around New York City - where in reality they'd never last more than a minute against the machine-gun wielding gangs and police - it's a welcome change to find them in their proper place, the beautiful landscapes of Japan's mythical past. This all combines to provide a great atmosphere.

The actual gameplay isn't as varied as Ghouls 'N Ghosts, but the variety of weapons, various vertically scrolling sections and plenty of different enemies provide much more than the average ninja slash-'em-up. What's more Chris "Power Drift" Butler has worked wonders in converting the game. The imagination in the backgrounds has, on the whole, been very well replicated but it's the sprites which really shine. The way enemy ninja run on, draw their swords then try and lop off your head is great fun. Ninjas armed with rifles crouch, take aim then fire. They may be small, but the enemy sprites constantly impressed me with their excellent animation. In my firm opinion, although the Welshmen would disagree, the graphics are much better than Ghouls due to their surprising realism.

There's no hiding the fact Ninja Spirit is tough, and not brilliantly original, but it's plenty of fun executed with great panache. Heartily recommended.

Graphics 90%
Some intricately detailed backgrounds and - most especially - brilliant animated sprites create a first-rate atmosphere. End-of-level monsters and vertically-scrolling sections are great too.

A tough, but very addictive slash-'em-up!