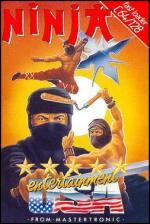 Why is it that most of the inhabitants of the Oriental East seem to, at some point in their miserable lives want to be Ninjas, and the only possible way of fulfilling this dream is to appear in a bash-'em-up Karate game?

This one is set, surprising as it may seem, in an Oriental temple far out in the mystical east. Many Oriental types have come to worship here, and now, after years of the temple being a hallowed place it has been desecrated. It has been invaded by a monstrous hoard of killer Ninjas, who have captured the voluptuous Princess Di-Di and locked the poor girl in the uppermost turret of Ninja Towers. However, it's not just a case of opening the door and letting her out - no Ninja killer would let that happen.

In every room at least one Ninja has been placed to defend their apparent right to Princess Di-Di. To get past them, you will have to attack them using several traditional Ninja fighting moves - thirteen in total. When you begin to attack them, a small bash meter appears at the bottom of the screen, showing the resilience of both you and your opponent. The idea is to continually bash each other until one of the meters reaches zero. The loser is then reduced to a pancake-sized lump of rotting human flesh, leaving you to battle it out on another occasion or die very slowly.

As well as the good old fist manoeuvres, you are in possession of a deadly sword which will easily lop your opponents head off. You can also pick up fighting stars which you can throw about.

As you make your way up through the tower, there are idols which have to be collected to give you access into Princess Di-Di's chamber. These are heavily protected by some of the most deadly Ninjas of the lot, so if you can get past this violent bunch, then you can surely get your Oriental mits on Di-Di and have your wicked way with her. (Har, har)!

I've just about had it up to (waving hand somewhere above his head) here with grotty Ninja-orientated games. Face up to it guys, they're becoming really monotonous now - especially this one. Ninja is so ridiculously easy, it's unbelievable. It's possible to kill every opponent by using the low kick, and thus make it to the turret in no time at all!

The graphics are not at all atmospheric and the game may as well be set on a ordinary block of flats. This game has put me off playing any more Ninja games and I am dreading Fist II, Avenger, Return of the Ninja Warrior, etc.

This game is awful. It doesn't look good, sound good or play at all well.

It's just so easy - and very tedious with it. Ninja is the worst excuse for a karate game I've seen, and even at £2.99 it represents poor value.

Not another Ninja game? Yes, I'm afraid it is, and it's not very good at that. The game is ridiculously easy to complete - failing off my chair is more difficult, challenging, and addictive. The graphics are really substandard, and the sound is pretty grotty too. Why doesn't somebody come up with another genre of games? Ninja games are boring, especially when they're as crummy as this.

Presentation 40%
Adequate instructions but little else.

Hookability 37%
Easy to get into - too easy.

Value For Money 30%
There are better games available for less.

Overall 25%
One of Mastertronic's weakest releases.

Simple sprites and backdrops make this undemanding and dull. One of Mastertronic's weakest releases.