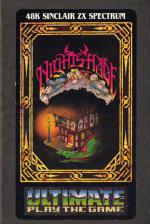 Well, they've done it again! Just when you thought Ultimate had squeezed the last out of their famous 3D maze/puzzle games, the C&VG Golden Joystick award winners pull something new out of the bag.

Ultimate's latest is set in a strange plague-ridden village called Nightshade. The village has been blighted by an evil force which has transformed the villagers into a bunch of demons, vampires and other foul creatures.

Your job is to lift the curse on the village. Simple, eh? No, not really! In true Ultimate style the solution to the cursed village is left entirely up to the player.

The graphics - mysteriously deserted half timbered houses and odd assorted demons - are great. Sound effects are up to standard for the virtually dumb Spectrum and gameplay is just great fun.

Actually a brief spin among the monsters and I've discovered that your brave adventurer can pick up antibodies from within the haunted houses to protect himself. You can use them to zap a few monsters.

Another nice touch is that you can switch your angle of view with a touch of a key. Useful to prevent monsters creeping up behind you.

Nightshade is another instant classic from Ultimate - it'll keep you guessing for some time. But how long can they keep using a similar format for their games?

Another instant classic from Ultimate - it'll keep you guessing for some time.