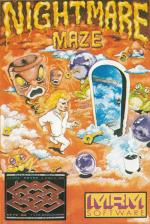 In Nightmare Maze, from MRM, the hero of the scenario. Sleepy Joe. must make his way around the maze collecting the eight keys required to open the Dark Door of Deeper Sleep and progress to the next level.

Unfortunately for Joe he is not the only occupant of the maze. The pathways are strewn with Springy Thingies which bounce around the maze emit ting an irritatingly loud "bdinging" noise.

There is no fear of Joe falling asleep in this game! But the sound can be turned off before starting the game.

Occasionally a cup of black coffee will appear in random positions around the maze.

Touch the coffee and the bouncing beasties will disappear for a short time allowing Joe to collect his keys unhindered.

This facility is essential as it is infuriatingly difficult to collect all the keys within the time limit without having made the baddies disappear at some stage.

One slightly irritating thing is that when a life is lost the keys already collected go too, so you must start again with eight keys to collect.

As you progress through the screens the complexity of the maze increases and the Springy Thingies are replaced by another bevy of bouncing baddies.

The graphics of this game are drawn using the characteristic MRM 3D shading effect, the floor of the maze is given depth and all moving characters a shadow.

But the high standard attained by the graphics isn't repeated when it comes to moving the characters.

Moving in a straight line causes no problem, but when Joe comes to a crossroad, usually with a Springy right on his tail, it is well nigh impossible to make a smooth sidestep up one of the adjoining pathways.

Unless Joe stands in the exact position at that junction there is no way he is allowed to change direction.

When releasing a new version of an old established theme such as this it has to be perfect. Unfortunately this was one nightmare that I could have easily slept through.

Other BBC Model B Game Reviews By Jon Revis

The high standard attained by the graphics isn't repeated when it comes to moving the characters.