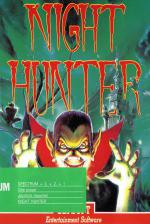 It makes some people go green, it makes some people's eyes light up. Some individuals have been known to faint at the sight of it, while others regard it as a bit of a delicacy. Its sticky and warm, goes all crusty when its dry and there are about ten pints of the stuff sloshing around inside you right now. What am I talking about? It's blood, of course!

And by spine-chilling coincidence, blood (or sang as they say in France) just happens to be what this latest offering from the-land-where-even-the-dogs-wear-berets-and-strings-of-onions-round-their-necks is all about.

As ghoulish Count Dracula you've only got two aims in life. One - to become Master Of The World. Two - to obtain an endless supply of blood. After years of research in your huge vampire's library you've finally worked out how to achieve number one - just collect three parchments from the 20 different castle-like levels of the game (that's 60 altogether) using the five keys you find in each. (Quite why doing all this enables you to become Master Of The World isn't quite clear.) Anyway, after that you're free to retire, sit back, relax and indulge in your favourite hobby (laughing melodramatically and shouting "I am Master Of The World", I suppose).

Objective number two comes in along the way. All this wandering through doorways, up staircases and along creepy galleries soon takes its toll and you start to feel a mite peckish. So what do you do? You stretch out your arm, grab the nearest body, and get your pearly-whites into that juicy looking jugular, of course! Yum yum.

But (but! But!) for some reason the castle inhabitants aren't what you might call chuffed about this. Some even go so far as to display their dissent by hitting you (blokes) or warding you off with their crosses (women in mini-skirts). Every now and then a wicked witch on a broomstick flies by and gives you a nasty tap on the head too. Yikes! (Dodge the old bag.)

However. Dracula's no sucker. Over the years he's learned how to transform himself into a vampire bat or werewolf if need be - and he's not afraid to do it! The wolf, a kind of hairy mutant bloodhound, packs a feisty punch but the bat is even handier - one flap of the wings and you can avoid any dangerous holes or pitfalls lurking on the ground.

So how does the game add up? Is it just a ropey old collect-'em-up spiced with a bit of spooky stuff, or is it something a bit more? Well, it depends on how generous you're feeling really. Being in a good sort of a mood, I'd say that collecting keys and throttling people isn't what you'd call a brand, spankingly new idea, but reasonable animation, natty graphics and a decidedly weird atmosphere can invest it with a certain dash of je ne sais quoi (another thing they say in France).

Actually, there's one more thing they do well in France (besides being a bit weird that is) and that's cookery. So here's the recipe for Night Hunter. Take one rather ordinary collect-'em-up, add a cuddly-looking werewolf and a sneaky Dracula, toss in a bunch of slightly craply animated victims, throw in the tongue of a ten-day-old newt and there you have it - a reasonably amusing (but by no means brilliant) vampire caper. Now, has anyone got any garlic?

A not-all-that-original arcade game given a new(ish) lease of life by a pointy pair of false teeth.

A not-all-that-original arcade game given a new(ish) lease of life by a pointy pair of false teeth.