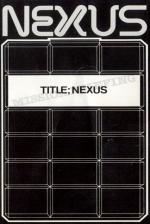 Coo! This looks like a rather swish package. The snoozey old cassette covers that we have been accustomed to over the years were never much to look at, were they? Well, Nexus have taken a different approach. Inside of the normal style box, or those horrible video cases, they've had a re-design. The tape now comes in a rigid plastic container which looks very sci-fi and "module-like".

Having finally broken the box open I pushed the tape onto the deck and waited. And waited. The Commodore loading has never been famous for its speed, and even with turbo-load this game seems to take a frighteningly long time to load. Eventually, it finished, and the screen flickered, if not exactly burst, into life.

In Nexus, you take the role of a newspaper reporter, whose friend has been kidnapped by a fiendish drug baron, and whisked away to his hideout in Columbia, South America. Your obvious objective is to rescue your friend. Of course, any hack worth his sault would realise that there is the possibility of a very good story in such events. This is your second task - to report all the information you discover to your editor, back at the newspaper. Now, the story would be Pulitzer Prize winning material if you could actually crack the drugs-ring too...

The opening scene is of your character arriving - through an underground river at the baddies' HQ on a jet-ski. After you leave the shore, and progress in-land, you will be greeted by a friendly character called Tony. He will help you to get started.

Gameplay is rather similar to Impossible Mission. You control an animated character which runs left and right across the screen. He can also enter doorways by pushing the joystick up. If you make this move when a door isn't in sight, you will be taken to a menu of options, regarding greeting people, taking a photo of important locations for your story, launching into unarmed combat, or using the stun gun or hand grenade.

The selection of these options is quite clever. Instead of having to cycle through the options, you can move the joystick to a particular position to select. For example, moving the joystick in one direction would make you take a photo, and moving it another way brings the stun-gun into action. It's okay if you have a good joystick, but easy to make a mistake if your stick is a bit battered.

Gameplay isn't particularly fast. The graphics are a little flickery. There's nothing really wrong with the game, though, and it is fun to play, as well as being challenging: There's music too. But it's ghastly.

There's nothing really wrong with the game... It is fun to play, as well as being challenging: There's music too. But it's ghastly.