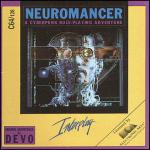 Slowly, as you wake up, the world that gradually swirls into focus looks suspiciously like the close up view of a plate of synth-spaghetti.

Just after wondering what the hell is going on, you begin to remember. You've been in Chiba City for a couple of days now, having pawned your deck to get money to live. The money soon went on liquor and synthetic food in an attempt to shut out the things that brought you to Chiba City in the first place; the disappearance of fellow Cowboys, the weird thing going on in Cyberspace - and just how the hell are you going to stay alive? The secrets to these mysteries can only be solved within Cyberspace itself, but getting in isn't going to be as easy as it seems.

The first thing you must do is get your deck back...

My expectations of Neuromancer were initially very high, since it dealt with a subject I'm very interested in, but when I first saw the game, I thought that it was a bit like Maniac Mansion rather than a Cyberpunk fantasy.

After playing the game for about an hour, my thoughts changed a lot. The atmosphere grows the longer you play the game due to all the subtle Cyberpunk workings of the plot; the Decks, the PAX network system and the background conversations that build a world for you to explore.

My only criticism is that each location is held on disk, making moving through Chiba City a slow affair. But 15 quid for a two-disk role playng game isn't bad, and Neuromancer gets my vote of confidence any day!

I tried to get myself into the right frame of mind for playing Neuromancer by imagining things like the opening sequences to Blade Runner. I didn't have to bother: Interplay have managed to include a great deal of this kind of atmosphere in the game, setting off modern structures against decayed buildings and adding subtle technological references so cleverly that you soon take them for granted.

When sending messages on the PAX, I even started using a chatty tone which was understood! This kind of detail is what makes a role playing game brilliant, and Neuromancer is a very high quality program indeed. It's just a shame that cassette users will miss out.

I like this sort of game and I like Cyberpunk, so naturally I think that Neuromancer's great! I thought that Blade Runner was dead good and this is as close as a computer game has ever got to capturing the atmosphere of the film, especially when you think of CRL's disappointing licence.

Playing the gamee is rather like actually being a character in one of William Gibson's books - that must be a good thing, since it's based on one!

The balance between the run-down and the futuristic is just right and gives the realms of Chiba City the kind of depth only usually found in serious adventure games. Future freaks with disk drives should invest in a copy as soon as possible.

(To help you understand the review better)

Synth-spaghetti: A form of artificial fast food.
Chiba City: An area by Tokyo Bay in the Kanto District of south-central Honshu, Japan.
Deck: A personal computer network terminal which allows entry to many systems, including Cyberspace.
Cowboys: Generic term for Desk Operators.
Cyberspace: A computer matrix, rather like another dimension, which contains many computer networks.

Presentation 88%
Brilliant in-game presentation with many subtle points, but the frequent disk-access slows things down at times.

Hookability 82%
Since it's a role playing game it takes a while to get into.

Lastability 91%
Avid RPG and Cyberpunk fans will be hooked for a long time.

Overall 84%
Interplay come up with the goods on an unusual and interesting licence and turn it into a very satisfying RPG.

An unusual and interesting licence, turned into a very satisfying RPG.