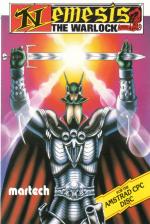 At last Martech has released this game for the Amstrad. I've had a friend GBHing my ear for weeks about how good it is for his computer. So I loaded it with trepidation and high hopes.

You play Nemesis the Warlock. Your quest: to boldly go where no slightly animated cripple has gone before. Oh yes, and to reach the heart of Torquemada's empire. To do this, you must kill a certain number of your demented followers - known, curiously, as Terminators - on each screen. This will allow you to search around for the exit.

You have a sword, which you can use to swipe blindly at the Terminators, and a gun. You can use the gun only when you have found bullets for it. The bullets are hidden in small boxes, dotted around the screen. In every box there are twelve bullets.

When you shoot a Terminator, its deflated body will fly into the air and stay where it falls. This clogs up the screen a bit too much, especially after a firing fit.

At the bottom of the screen is a display showing you how many bullets you have left, how many more Terminators are left for you to shoot before you can go in search of the exit, and a graphic representation of your heart as it gets bled dry by the evil influence of Torquemada. A picture of Torquemada's face gradually appears as he gets stronger.

I felt that the graphics let this game down. The animated walk of both Nemesis and the Terminators is jerky and uncoordinated. But I'm glad to say there are some nice touches in the animation department. When you shoot, the first pull on the trigger makes Nemesis pull the gun from his clothing. Every subsequent pull, until you move, shows the gun moving up from the recoil of the shot.

Sound is certainly nothing to write home about and lacks any realism. Not all it could have been, but still not a bad challenge.

It all seemed very samey to me hacking, shooting, platforms and little else. You'll certainly have to plug along for some time to complete it, but more variety and action would have been appreciated. It needed either more skill to outwit your opponents or many different opponents on screen.

Grab Factor 61%
P. Easy to get into.
N. Dead bodies clog up the screen too much.

Overall 65%
Not a bad incarnation of the comic.

Not all it could have been, but still not a bad challenge.