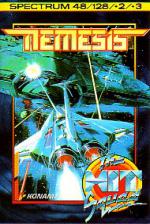 I have little patience with games where I get killed at the same point (usually near the beginning) every time I play it for about six months. So Nemesis is fortunate to be getting off lightly. It really is horribly difficult, mainly due to the speed at which everything runs.

In case you re not familiar with the smash hit number one chart-topping etc, arcade game, erm, there is one. And this is the conversion of it. It's as standard a horizontally scrolling shoot 'em up as they come, with all the usual add on weapons, giant end-of-level nasties and all the rest of it. While the original was slick and very lovely to look at, the conversion has a very Spectrumy feel to it, which means slightly jerky sprites and numerous short-cuts with the graphics. All the same, it's very playable (apart from being a bit too difficult for its own good) and, like so many budget re-releases, makes a tasty little barg.

Very playable, apart from being a bit too difficult for its own good.