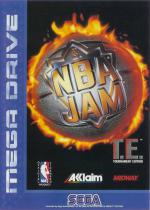 The eternal problem for big companies is how to make their best products even better. Sometimes bright ideas like calling them 'Power', 'Future' or just 'new and improved' don't wash (so to speak). Suddenly you've got the nation's housewives posting their ripped-up Y-fronts to you in protest and a major PR headache.

So Acclaim must have been extra cautious when putting together the "Tournament Edition" of NBA Jam. The previous game was one of their big successes of last year, doing the running away back in cold February when other video games were selling like Magnums in Finland. The basis for the update is Midway's late 1994 arcade Tournament Edition, which added some features to, whilst retaining the choice action of the original, NBA Jam. An extra 8MEGs have been apportioned to include all these for the Megadrive conversion.

Converted from Midway's Tournament Edition coin-op, following the success of NBA Jam in 1994.

Put the ball through your opponent's basket as often as possible within the time-limit.

Basketball is a game with a simple objective, and NBA Jam Tournament Edition is basketball executed simply. Just get the ball through the hoop in one of three ways:

The first NBA Jam had a hidden 'Juice' Mode which enabled you to play at 'Pro-Plus-snorted-through-a-twenty-quid-note' speed. The follow-up now supports this popular cheat as a fully fledged game option. There are four different levels of Juice Mode, from fast to mental.

Newly featured in this Edition are the hot spots. Toggled on/off from the special features menu, they offer a chance to score some unbelievable dunks with the minimum of effort. Numbered hot spots appear at random on the court, lasting a short time. Shooting from on top of one accesses one of several highly theatrical scoring sequences.

Oh what fun we had last year, finding the ten faces secreted within NBA Jam. Acclaim logically think that sticking a massive 33 in this time will make for even more amusement, but there you are. Get to work locating this little lot, and we'll show you how next issue.

Teams have been augmented from the couplings of NBA Jam to feature three, four or more of the members of each conference side. The upshot of this is the ability to shuffle your team members should their performance disappoint.

Also, the games now incorporate an element of fatigue. The longer an individual is played for, especially on turbo, the higher their injury rating goes. This makes them progressively less able on court. Sensible subbing is the best way around it.

At points between game quarters, you'll find an array of colourful coaching tips (well, the text does change shade). These run from bloody obvious basic controls to genuinely useful ideas of strategy and play. Even more instructive is the player breakdown, showing who is dong what in any particular playoff.

As before, NBA Jam allows up to four players to take part in any combination of two-on-two, with the computer filling in any unplayed positions. Playing solo, you can toggle between computer assistance and total control.

Great, but let's not get carried away. There's some talk of this being "leagues beyond NBA Jam". Tournament Edition is better, but not so much better.

What Acclaim have done, quite sensibly, is make more of the 'bonus' parts of NBA Jam that everyone liked, like the Juice Mode, and convert the coin-op as faithfully as possible.

The result is a sure-footed, fast and slick basketball game that cements its position as No. 1 in that field.

But it is hard to detect 8MEGs worth of improvement in here - almost half the original game. I'd be cheesed off just to pay for a large amount of cheesy 'hidden characters' which is not really the point of the whole game. I was sometimes a bit peturbed with the ease with which the CPU pulled off three-pointers (strangely, whenever it was under pressure!) which confirms that NBA Jam Tournament Edition is best played with human opponents.

Sure to rekindle a bit of Jam mania, and deserves to.

You can't help but love this game. The original was a fine example of totally fab gameplay, but the sequel really pushes out the boat when it comes down to all of the options, special moves, and hidden characters.

What's more, the graphics have been vastly improved to provide hooping fun at a furious pace. But, as Gus rightly points out, nothing has radically changed from the original. Basically, if you are already the proud owner of the first NBA Jam, I'd think twice about forking out.

If not, Tournament Edition is a must buy!

Graphics 91%
P. Courts crispier than a box of salty popcorn, with splendid animation to boot. Superb scrolling to keep everything centred.

Sound 88%
P. Improved sound, with even more inane commentary to annoy your friends with.
N. Some unconvincing gaps in the FX: groans but no cheers.

Playability 91%
P. Immediate, groovy pick up and play gameplay stylee, and suited to small groups with big sherbets.
N. Not a vast amount of depth.

Lastability 86%
P. Will be attracting your attention just as long as the coin-op attracts two-bob bits.
N. Not so vastly different as to be an all-new thang.

Value For Money 87%
N. Penalised for having a high-quality predecessor in NBA Jam, available for less.

Overall 90%
The sequel still scorches, but doesn't offer that many surprising new features. Tournament Edition is the best yet, though.

This NBA Jam upgrade scorches... Tournament Edition is the best yet.