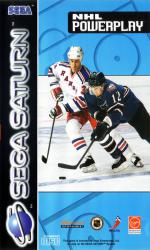 The Saturn gets its second ice hockey game (after 1995's NHL All Star Hockey). This is another simulation endorsed by the NHL.

Attracts the wrong sort, this kind of thing. Not surprising really - ice hockey's got to be one of the few games where starting, and watching, a violent scrap is actually a match highlight.

NHL Powerplay '96, Virgin's challenge to Sega Sports' NHL All Star Hockey, is a finely tuned simulation that thankfully takes into account the more visceral aspects of this 'skate n maim' sport. Hockey sticks are an ideal shape for indulging in a bit of grievous, and the bodies go flying here. The odd knock and dirty tackle is one thing, but Powerplay (named after the limited power-up period where you can turn the screw on your opponent and pummel away until you score) features some spectacular examples of rink rage which can send players sliding, starfish-like, across the ice in a complete daze.

So if you're more interested in slapping other players than simple slapshots, then this is your game. The serious hockey enthusiasts, meanwhile, are in for a treat with a well-designed simulation that seems to include everything bar the St. Trinian's team. Now *that* would have been a scrap worth watching...

Take to the ice and play hockey with the finest across exhibition, season, playoff or world tournament matches.

Being officially endorsed by the NHL means that the US league's 28 teams, and all their players, are included in the game. In addition to this, there are 16 international sides - ranging from giants like Russia to relative feeblies like the UK - to choose from. The latter months of the game's development were taken up with perfecting the complex artificial intelligence system - your opponents and team-mates adjust to your skill levels (regardless of the abilities of your chosen team) so cock-ups and unpredictable behaviour don't necessarily throw a complete spanner in the works. The more you learn about the system, the more you'll get out of playing the game.

During one of the breaks between the three play periods you can access a detailed menu that provides you with all the kinds of detailed in-game slats that you'd expect from a top notch sports sim. Powerplay goes a bit further than most, however, with the chance to coach your team and adjust strategy with easy-to-follow graphics and advice.

Select the 'Coach Team' option and you'll be given the opportunity to do things like tailor your attacking play by altering the speed of player breakouts. Should you risk your defence by concentrating on aggressive up-front tactics? Or do you play it safe? The choice is yours. You can also fiddle with your team's offensive zone play by choosing between such options as 'dump and chase', 'carry in', and 'pinching defence'. Don't worry - we had no idea what all that meant either, but the diagrams explain a lot in themselves, and you'll also be able to glance at the useful 'pros and cons' advice which flashes up beside each option you consider.

Ice Hockey games don't set the office alight like a good beat-'em-up or racer, but you have to respect Powerplay for getting just about everything right.

This is a vast improvement over Sega's own NHL Hockey of last year, showing just how much technical improvement is possible. The best features are the very smooth scrolling and rather intelligent camera panning, which takes the work out of finding the best angle, and the excellent control response.

The graphics are extremely crisp, with the polygon players appearing solid and detailed close-up. In the more important area of gameplay, Powerplay has the slickness and pace of the classic EA Hockey games (Don't sue us, EA!) but with many more controls and tactics than ever were possible on the 16-bit machines.

If you want to play ice hockey on your Saturn, the options are admittedly limited. However, your choice is made all the easier by the fact that this outshines last year's NHL All Star Hockey in almost every respect - the graphics are smoother and have a greater solidity; the gameplay is more realistic; your opponents more intelligent - even subtle details like the players' shadows on the ice are more effectively realised.

And Powerplay isn't saddled with the interminable organ soundtrack that made All Star such an ordeal. If you're looking for an intelligent, detailed and intuitive game of hockey (this one's so smart it doesn't even give you the option to change the zooming and rotating camera view - you just don't need to) then you don't go far wrong with this.

Graphics 87%
P. The ice looks great and the motion-captured players are even impressive in close-up, despite a slight 'sticklebrick' appearance.
N. The crowds are a bit flat.

Animation 88%
P. Very smooth - the roving camera does its job so seamlessly that you usually forget about it altogether.
N. The puck occasionally slips out of view.

Music 82%
P. The punchy chip-generated score only appears at the beginning of the game and between periods. Adds to the tense pre-play atmosphere.

Effects 84%
P. Excellent noises from the players' sticks and the pucks, all of which sound very realistic.
N. The crowd's responses are sometimes inappropriate, and there are stuffy tannoy announcements instead of a commentary.

Playability 89%
P. No-nonsense gameplay that reveals hidden depth the more you play.
N. Although good, this is unlikely to convert non-hockey enthusiasts.

Lastability 85%
P. If you like ice hockey, this will keep you coming back for more.
N. But you'll need a human opponent to break the one-player stalemates.

Overall 87%
Easy to get into, difficult to master. A detailed and compulsive sim.

A detailed and compulsive sim. Easy to get into, difficult to master... and it outshines last year's NHL All Star Hockey.