1st September 1987
Mystery Of The Nile
By Firebird
•
Commodore 64 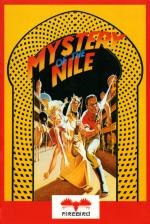 Deep in the Arabian desert, the evil Bedouin Abu-Sahl has stolen the priceless Jewel of Luxor and plots to sell it to the equally despicable South American collector Baron von Bloefeldt.

Loyal Egyptian, Al-Hasaan, got wind of Abu-Sahl's plans and, determined that the Jewel should stay in its rightful place, has contacted the American adventurer-archaeologist, Nevada Smith and his student assistant Janet Dwight.

The action commences in the bustling marketplace with Janet negotiating the teeming stalls and buildings of downtown Luxor. Having cleared the initial screens, Miss Dwight eventually meets up with her colleagues. Each character is controlled independently by selecting the required person from one of three numbered keys.

The character change position so that the one under control takes the lead, and can use his or her specific weapon (Janet's grenades, Smith's revolver and Hasaan's brolly) to defeat the hordes of Abu-Sahl.

I particularly like the way that the characters all shuffle round to let the controllee take the lead, and then leap out of the way whenever a shot is fired by that character.

It's a rather humorous game and should be played with tongue firmly in cheek. At £8, you could certainly do with a sense of humour.

Mystery Of The Nile is neither engrossing or addictive, but there's fun to be gleaned from it, mainly due to the stupidity of the scenario and the awful graphics!

The sprites look like cardboard cutouts (with appropriate animation) and the backdrops look like something you'd get off the back of a Shredded Wheat packet.

I can't understand why this isn't on the Silver range - it certainly lacks the reward and enjoyment of some of Firebird's budget tiles, which are available at a quarter of the price.

Presentation 88%
Humorous scenario and plenty of options, including a password sequence which allows the early screens to be bypassed.

Graphics 40%
Hi-res backdrops and a gaudy colour scheme give a rather Spectrumesque feel.

Hookability 71%
The simple control method and choice of three characters give immediate appeal.

Lastability 73%
Plenty of Egyptian locations to visit, and the use of passwords simplifies progression.