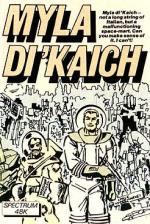 All the life support computers have failed and the remote stock robots have gone into memory overload in Myla Di'Kaich, the world's largest and most strangely named space station. This is something of a pity since your craft has broken down and you need twelve assorted bits to repair it, not to mention some oxygen. So, there's only one thing for it. You'll have to go and look for them yourself.

Myla Di'Kaich is one of many platform games currently being churned out. It is not particularly heavy on things and nasties to be leapt over, but is more concerned wth shifting barriers, lifts and moving platforms all of which are designed to crush you horribly if you get the timing wrong.

The graphics are fairly crude with bright garish colours and a fair bit of flickering. The sound is a sort of electrical type of buzz but can be toggled off if it begins to annoy you. You have a continually decreasing oxygen supply but ths can be replaced at various parts of the game. The playing area is large and you can explore freely.

There are some quite nice ideas in this game working out how to use some of the sliding and moving platforms to best effect but the screens just look too bright and messy and the overall feeling is one of confusion. There are better platform games around than this.

There are some quite nice ideas in this game... but the screens just look too bright and messy and the overall feeling is one of confusion.