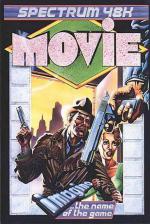 Of all the Spectrums in all the world, Imagine's new game Movie ad to walk into ours. Settle into your back row seats, forget the Pearl and Deans and read Gwyn Hughes's review of this gangsters and gumshoe mega-game. Play it, Sam...

Call Mike Hammer, call Sam Spade.... but when you want the best you call me - Jake Monkey-Wrench. I tool around and get the job done.

The voice on the phone said, "Jake, I've got a problem. I'm the Ed." "That's some problem." I agreed. Ignoring me, he continued, "I want you to find a cassette tape. It contains enough evidence to send Mr Big down the river for a very long time." Pausing only to wonder why the Ed should went to send a gangster on a boat tour, I asked, "Tell me where I might find it." "That's the problem," he told me, "It's hidden in a computer game!"

And so it was. I sat in my East Side office, In front of a computer monitor, the whole of New York to search and I'd never have to leave the building. Luckily the city was no stranger to me - the same 3D view that seems to turn up everywhere nowadays. However, I was pleased to find that I could choose between up/down, left/right movement or rotation and forward techniques. And what was this - 'IQ On'? A neat touch means that if I walk into an object the computer can take control and guide me past it.

10.32 pm: I'd found a gun and I was going to need it. In the very next room some hood began taking pot shots at me but I was quick on the draw. I transferred to the icon menu and fired, filling him full of holes and he faded away. No room to be trigger happy though - the city may be a jungle but not everyone's an animal. Soon after I'd plugged the punk another slouched figure approached. I stopped but his speech bubble appeared. But what did he mean by, "I'll see you later"?

1.03 am: I'd lost count of how many rooms and alleys my nicely animated figure had trudged down, but there were lots, filled with hazards of the most unexpected types, like animated suits of armour. Something strange was afoot. I'd had to use my wits to push the furniture around and shift objects and I wasn't sure I was getting anywhere. Then I met her the dame.

The Ed had warned me that there were two sisters tied up in the case - identical twins but while one was good, real good, the other was evil incarnate! I hoped I'd made the right choice as I followed her. Perhaps she could lead me to the gang boss....

1.07 am: You win some, lose some. Like a kid, I'd followed her straight into a trap. I'd dodged the bouncing bombs, the suits of armour and the low down rats who'd hoped to fill me full of lead. But I'd always been a sucker for a frail and now I'd paid the price. This game is as cool as a trench coat and as atmospheric as a misty street. Here's looking at a VDU, sweetheart!

This game is as cool as a trench coat and as atmospheric as a misty street. Here's looking at a VDU, sweetheart.