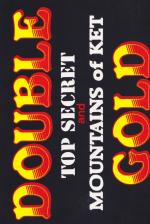 Mountains of Ket is, as most Crusaders will know, a very old game that first sprang into life on a Spectrum back in 1742, or thereabouts. It's the first part of a trilogy in which you must cross the aforesaid mountains and defeat the malignant Vran Verusbel (maddest of the Mad Monks) and the malevolent Delphia (most beautiful woman in the world).

Quite why anyone should want to destroy the most beautiful woman in the world is beyond my comprehension, but I leave other minds more macho than mine to dream up their own exciting reasons.

It's not often that one sees an old game reprogrammed using a modern utility. For the sake of nostalgia, I'd like to give this game a clean bill of health, but it leaves a lot to be desired.

First, the blurb on the cassette cover boasts "interactive characters". Well, I suppose a character with a message can be called interactive - but that's hardly a big deal, is it? Let's be honest about this, there is absolutely no way that you can use a commercially available adventure creator to program a proper interactive character worthy of that name. The closest I've seen are Fergus McNeill's whimsical Boggit characters, or Maid Marion in Robin of Sherlock (both Quilled), but there really isn't much red-hot interaction in Ket-land.

Secondly, the game shows signs of carelessness in programming. After buying a strong horse, your inventory shows that you are carrying "a strong horse". OK, so I may be 11 stone of rippling muscle, but even I don't make Arnold Schwarzenegger look like Ronnie Corbett. The horse, methinks, should have been handled differently.

Another example. You go into the shop, see a vial of potion and "Buy vial". You're then told that "There's no-one here to buy it from", despite the shopkeeper standing right in front of you! The problem here is that the program isn't telling you that... ahem... it doesn't actually understand the word "vial". It expects you to enter "Buy potion"!

I can just imagine someone at Incentive demonstrating this program by typing in "Buy large bottle of desoxyribonucleicacid, and when the program replies as before, pointing out proudly that the program understands the basics of recombinant genetics.

All is not lost, however. There are some novel features here. The program handles money properly (in that you can actually count your coins and must budget properly for expenditure) and also has a combat routine. The latter involves the use of three variables, process, energy, and luck, that are assigned to the player at the beginning of the game in varying proportions.

When you duff up a fellow traveller, or someone comes over all heavy on the mountain path, the program puts you into combat mode and you each take it in turns to swing at the other combatant. If you're hit, you have a chance to dodge (depends how lucky you are), and in each round you have a chance to escape. A word of warning - think twice before knocking off any of the villagers, as their companions turn a wee bit savage when they see what you've done.

The other game in this set is Top Secret. Ugh, I'm afraid I didn't like this game much. Let's get it straight, there's nothing actually wrong with it but I'm afraid that after a few years adventuring one gets heartily sick of penetrating yet another nuclear installation in order to stop some deadly missile being used to pervert world sanity (or what's left of it!).

Why do we have to go through this scenario all over again? Surely original ideas aren't that hard to come by? Even killer dolphins disguising themselves as duchesses and swallowing the Queen at a Buckingham Palace garden party would be preferable to the old ultra-whizzo-top-secret-military-base-deadly-missile-gosh-shriek-yawn number.

Anyway, for what it's worth, the game has shorter-than-average location descriptions (even for space-hungry GAC) and at one point kills the player off for no better reason than he or she decides to go north. The old sudden-death trick, forcing you to restore or reload, is now universally condemned by good adventure writers everywhere. OK, so if there's a cliff to the north, going north kills you, but at least say there's a cliff (or whatever) to the north. A location that serves no purpose except to kill the player on entry is poor design, says moi.

Perhaps Incentive will get back to me and say that there's an object in the game that would have enabled me to get past that hazard. In that case I'll eat the dead rats I found in the sewer... but I think in this instance my stomach's safe.

Playing these two games made me a little more understanding of Incentive's view that Linda Wright (see previous review) is an "up-and-coming software author". She certainly puts up a better game than the ones on offer here.

Other Amstrad CPC464 Game Reviews By The Pilgrim

A word of warning - think twice before knocking off any of the villagers, as their companions turn a wee bit savage when they see what you've done.
Logout