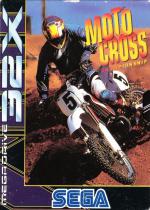 When I were but a young lad, kids didn't have mini motorbikes to burn around on. We had to make do with BMXs - you know, little pushbikes with tiny wheels and seats that made your bum hurt a lot. The best thing about a BMX was the tricks you could do to impress the girls. Bunny hops, Endos and Aerials were all part of my daily repertoire and if nothing else, I was happy that you couldn't pull off these kinds of tricks on some spawny rich kid's motorbike.

But alas, the halcyon days of BMX-ing are over. It's all mountain bike-this, mountain bike-that now. And junior Moto Cross too, if your parents have a few thousand quid to spare. Or a couple of hundred to kit you out with a 32X and a solicon version of the sport. Sega's Moto Cross 32X takes most of its meat from the Road Rash series, using the same 3D perspective. There's three bikes, twelve tracks and a split-screen two player mode thrown in for good measure. And you can duff up the other competitors too.

Takes more than a pinch of inspiration from the Road Rash series, although the 3D style racing action is fairly original.

Come first in all the races, win money and have a go on a superbike.

On Moto Cross, you and a friend (if you have one!) can team up for some bonding-type competitive fun. You can even fight each other if you want! But obviously the aim is to win the race, which incidentally is fairly easy if your partner falls off their bike a couple of times.

You see it takes them so long to get back on the thing, that you'll be miles ahead, racing on to glorious victory.

Lesson one: Don't, under any circumstances, fall off your bike!

Unlike most bikin' sims where there's loads of bikes to choose from, but you have to earn money to buy them. Moto Cross allows you to choose any bike from the beginning. There's only three bikes in all though, so I don't expect this process will take you very long.

Anyway, for those of a nervous disposition, there's the 50cc fartmobile. More experienced players can go for the blisteringly fast 125cc, and the reckless types amongst you will go for the Superbike - a delicious hybrid of speed and reliability.

Lesson two: We-ell. Always choose the Superbike. The others are a load of sh...

Moto Cross either started out as a nice 3D texture mapping routine, or a company directive to "get a freakin' racing game out for our machine".

Either way, the end result has not been worth the interim effort.

The scaling hardly makes for a smoother or more believable sense of movement than conventional Megadrive racing games. There's also a distinct lack of options or variety surrounding the unimpressive engine.

Nothing can save this from looking like a hasty piece of work worth avoiding.

I was really looking forward to playing this, as from early videos of the game, it looked as though 32X owners would be in for a treat.

Unfortunately the gameplay doesn't seem to have progressed much since then, and as a result, Moto Cross has a very "unfinished" feel about it. The graphics are absolutely fire - the racers are quite blurry and badly drawn, and all the tracks look the same.

The races go on for too long, and at the beginning of each one, it's very difficult to see *where you're going*. The two player mode is pretty poor too, and almost half of each player's screen is obscured with useless information.

Not the best release we've seen on the 32X by any means.

Playability 65%
P. Easy to get into, and even provides some entertainment for a while.
N. But overall, it's just too shallow, with little incentive to keep playing.

Lastability 58%
P. I'd like to say that "it will appeal to fans of the genre".
N. But it won't. Has very little lastability.

Value For Money 50%
N. With little lastability and very poor graphics, there's certainly not much value for money here.

Overall 63%
P. Look, I know there's not many games out for the 32X, but don't let that fool you into shelling out for this. It's very poor indeed.

Look, I know there's not many games out for the 32X, but don't let that fool you into shelling out for this. It's very poor indeed.