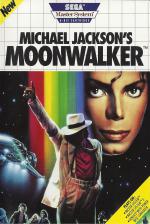 The plastic pop star strikes back! Michael Jackson, all-round good guy and champion of "the kids" makes it to his own console game, based on the "massive" movie.

In case you didn't know, Mr Big has kidnapped all of the kids and is ready to subject them to the horrors of drugs! Michael is a bit miffed at this to say the least, and pausing only to jump into his Smooth Criminal designer gear, decides to risk five levels of Mr Big's domain in an effort to rescue the kids and bring Mr Big to justice. Hooray!

There's four rounds to each level and in each, Michael has to run around the platform environment dishing out magical death to any crony that decides to cross his path. Our hero must search the level, opening doors and moving scenery to find and rescue the kids. When all the kids have been safely rescued, Mr Big appears and sends some of his most terrifying henchmen to try and dispatch Michael.

When they're safely out of the way, it's on to the next round with yet more kids to rescue. Each level has its own Michael soundtrack, including the funky Smooth Criminal, Beat It and Bad!

If the screen is full of nasty creatures intent on Michael's destruction, there's one way to send them all packing. Jackson likes to strut his thang occasionally, but in this game his dancing has a remarkable smart bomb eltect on everything on the screen! On the Megadrive version, the enemy sprites even join in before meeting their doom! A different form of Michael's magic involves him dispatching his hat on a mission of destruction. The Megadrive version has this available from the start of the game. On the Master System though, the option to use the hat only becomes available after Michael has found the appropriate icon - but it doesn't use any up any of Michael's magic reserve like it does on the 16-bit game.

For each level, there's a variety of enemy sprites after the righteous pop singer turned savior. Level one sees club bouncers pursue Michael around the 21 Club, whilst the streets of level two see Michael facing up to the scum from the rough end of town (as the music reminds you, they want him to Beat It!). It's down into the graveyard for level three, where zombie refugees from the thriller video attempt to show Michael the door to death! Among the other meanies found later on in the game are poisonous spiders and rabid dogs... Pretty nasty, eh?

It's not just his petrifying voice that's lethal. In this game, Jackson has a particularly nasty line in magic that can be used to dispose of any henchmen that seek to put an end to Michael's rescue attempts. One press of the button sees Michael kick some magic at the hapless cronies. For most of the bad guys one dose is enough to send them shuffling off this mortal coil. Michael can also crouch, and from here he can punch any goons that cross his path. Whilst jumping, Jackson can also launch into a dangerous pointy-finger pose - and from that there's no escape! There's also a moonwalking move, but you're going to have to work out how to do that for yourself!

The Master System version of Moonwalker manages to capture just about everything from the Megadrive game, and even manages to add some features that weren't in the original. There's only a couple of problems. The walk-around-and-find-the-kids gameplay is very repetitive and after a while it becomes more of a chore than anything else. Also, Megadrive Moonwalker scores because of the amazing audio-visuals. The formation dancing and Michael's various "oohs!" and "aaows!" are missing from the Master System game, and the music isn't astounding. The graphics and gameplay make the game initially very addictive though, but do try to see the game in action before purchase.

I'm amazed at how close this is to the Megadrive version - the graphics are very similar indeed, and the game plays very much in the same way. It's pretty good fun at first, and there's plenty of high-kicking action as you wend your way around the landscape freeing the kiddies from their captors. However, the difficulty level isn't set very high, so experts will find themselves completing the game pretty quickly. Moonwalker is a fun game with plenty of neat touches, but if you're a competent player, try before you buy.

Presentation 84%
Nice intro screens between levels, but little else.

Graphics 86%
Life-like Jackson sprite, but not much variety in the enemy sprites.

Lastability 75%
Moonwalker's appeal wears off after a couple of weeks.