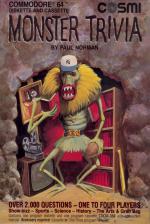 Anyone who has been caught by the trivia bug will know that it is very difficult to cure the addition. So it was that I was really looking forward to reviewing Monster Trivia, the latest offering from US Gold/Cosmi. Unfortunately, I was very disappointed.

For anyone who has been asleep for the last year or so, trivia is nothing more than insatiable desire to prove to your friends that you know more totaly useless bits of information than they do. This normally takes the form of a question and answer session with some sort of scoring system.

You are invited to take place in a mad Professor's cellar and asked to answer questions and so keep the trivia monster at bay. The person with the lowest score at the end of the game gets eaten by the monster and so on.

There are over 2,000 questions to be answered in sixteen series so people using a cassette have to do a lot of fiddling with the tape counter. You will not however be able to answer a lot of the questions. Not because you are stupid though, but because the questions are American!!

It is essential that trivia questions are geared to the country where they are going to be answered. Whilst I have a chance of knowing who won the FA Cup in 1963 or who the stars of Crossroads are, I and fellow Britons will not know who was the star pitcher in the 1963 baseball world series or questions about TV series which have never been seen over here!

Another problem occurs when typing in your answers, as the computer is very fussy, and inconsistent. Tale Of Two Cities was given as wrong; the correct answer being A Tale Of Two Cities. When I answered one question correctly with Mozart - just the surname - that was O.K. When I answered another with Kennedy, the computer replied "Wrong. The answer is John Kennedy". This sort of thing I found extremely frustrating.

The questions always fill exactly two lines on the screen. Some of the wording was so obscure that I was not always sure what question I was supposed to be answering. There were also some spelling mistakes present, mostly in the questions rather than answers but this one had me baffled. What does L.C.D. stand for? Liquid Crystal Display I answered. Wrong. It stands for Liquid Quartz Display. Now I know that American spelling is different from British spelling, but that is ridiculous!

There are also some bugs, noticeably when running out of questions in a tie-break situation.

The best way to assess the value of trivia games is to look at the number of questions per round. With a lot of the 2,000 questions being unanswerable, I reckon this to be very poor value for money. You would do much better say to but the Ultimate Trivia Quiz Game Book by Alan Hiron which has 10,000 questions for about £6. US Gold, who are usually so slick with their marketing, have come a cropper with this one.

With a lot of the 2,000 questions being unanswerable, I reckon this to be very poor value for money.