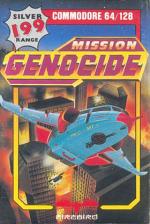 The Bad Star Empire is attacking your home planet of Crys-cit (who makes up these names?!), and you have been chosen to lead the counter-attack. Your squadron of fighter spacecraft must obliterate the invading enemy forces, thus saving Crys-cit from destruction.

Your ship fires lasers and launches missiles simultaneously, to destroy both enemy fighters and the vertically scrolling ground installations. Icons are sometimes revealed when these features are destroyed, which can give you shields, extra speed, and more powerful lasers and missiles. Before these can be added, glue must be picked up, then black hole icons avoided, as they suck in your add-on weapons (sounds painful, huh?)

When Mission Genocide first loaded and I pressed the fire button to begin, a feeling of deja vu swept over me. The overall appearance of the game is very similar to Firebird's now ageing budget shoot-'em-up, Warhawk.

The original Firebird release was well received, partly due to the fact that vertically scrolling shoot-'em-ups were the 'in thing' at the time. These days this type of game has to have some really special quality to make it shine and unfortunately, Genocide doesn't quite have it.

Just looking at the screenshots on the cassette inlay made me think of Warhawk, and actually playing the game brought back fond memories of that terrific budget game of old.

The blasting is as enjoyable as ever, and the add-on weapons make the game rather more compelling, but graphics and sound are pretty weak. The sprites and backdrops are garish enough to warrant inclusion as toilet graffiti and the SID chip is left twiddling its digits as it lets off a few feeble laser 'peeow's and white noise explosions from time to time.

For two quid, though, you should get enough hours of enjoyment from this game to make it worth looking up.

Presentation 68%
Thoughtful icon display screen and sense of humour throughout.

Sound 32%
Basic sound effects and nothing else.

Hookability 72%
Like most competent shoot-'em-ups, Mission Genocide is easy to get into.

Lastability 58%
Plenty of Bad Star nasties to destroy, but graphic changes are the only reflection of progress.

Overall 66%
A playable vertical shoot-'em-up, but not as good as Warhawk, which it mimics.

A playable vertical shoot-'em-up, but not as good as Warhawk, which it mimics.