1st April 1984
Missile Base
By Acornsoft
•
BBC Model B 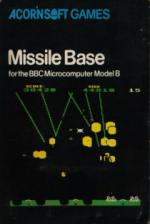 This is a superb adaptation of the arcade game which will have you glued to your TV screen long into the night, desperately trying to defend your cities against hostile missiles.

The only way to stop them is to skilfully fire your rockets to explode into fireballs in their paths. But don't be too trigger happy because you only have three anti-missile bases with nine rockets in each one.

Once you think you're coping with the missiles the fun starts, because then come the ones with multiple war heads which disperse at a fixed height if you don't get them, and throw out a burst of yet more missiles.

Also there are some very mean intelligent missiles which can dodge your fireballs and head for your cities and bases. And if all that sounds daunting, then wait until you get the satellites and planes as well!

If you really want to get the most from this game you have to play it with joysticks. In fact you'd probably need at least three hands and a lot of patience to even attempt it with the keyboard controls.

This is definitely one of the best games for the BBC Micro available.

This is definitely one of the best games for the BBC Micro available.