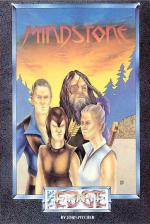 Mindstone is Dungeons and Dragons in disguise. It may be wrapped up in icons, animated screens and visual clues, but at heart it's a game of stamina, battling, spell casting and exploration.

As such it is neatly presented and highly entertaining though not, I think, so utterly technically staggering as previous Edge offerings.

Once again a crazed son kills his mother, breaks his father's spirit causing him to nearly go bald, and runs off with the most powerful substance in the kindgom. The crazy is Nemesar, the mother was Shalmera, the father is King Jorma, the substance is the Mindstone and the kingdom is the Shadowlands. The good guy is Prince Kyle, brother of Nemesar who assembles a team of close friends and comrades - Merel Quin and Taina - and sets off to find Nemesar and the Mindstone. Each member of the team has a different strength, for instance. Merel is strong and Taina has more psych power (used for spell casting).

Explore the Shadowlands, discover useful objects and spells, trade, defeat enemies, remove obstacles. Gradually you begin to discover what character is best suited to what purpose, you find ways of replenishing strength, psyche power and gold. As you search the Shadowlands you come across people with useful objects or advice to sell. You discover too, obstacles, of various kinds, blocking your way. Clearing a path may require the right spell, in the right person's possession, or perhaps brute force from the strongest member of your team.

Actions cost - one way or another - casting spells uses psyche power, battling uses strength. Whilst some team members are more obviously suited to certain tasks than others, it is important to share the duties so that no one character gets completely dissipated. It's important too. to keep your eyes open. When a useful spell or object is present a symbol momentarily flashes on to the screen as you enter it.

There are two kinds of graphic display divided between the top and bottom of the screen. The top of the screen is rather like the kind of location illustration you might expect in a medium quality, graphically illustrated adventure. It gives some sense of atmosphere but wouldn't win any prizes.

The same may be said of the animation. In the top screen you see the four members of the team. If you tell one of them to, say, fight, he or she will walk over to the opponent and begin what appears to be a strange ritual dance, where both sides politely take turns in attacking. Attacking and trading are mostly animated and, quite honestly, I could live without it.

The bottom section of the screen is for issuing commands and keeping track of the status of each character. It displays the current character status, objects held and spells possessed. If you are using the joystick/icon control mode, it also displays the various command options. The graphic and icons are good, rather like Shadowfire, although some of the objects need to be described using the Examine option, (which uses words) to tell what they represent.

I enjoyed Mindstone very much. Many attempts have been made to integrate D + D style strategy with adventure puzzles and graphics. Mindstone is one of the most entertaining, if not the most technically ambitious.