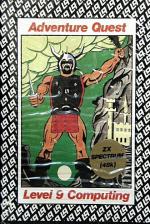 To a seasoned adventurer, Level 9 will have long been a household name, with games like Lords Of Time, Snowball and Return To Eden to their credit. However, Level 9 didn't make their name from these, excellent though they are. Any self-respecting adventurer worth his or her salt, really ought to have the Middle Earth Trilogy on his/her bookshelf. They are masterpieces of imagination, verbosity (some responses rival Infocom in length!) and speed. They really are the yardstick by which adventures should be measured. Colossal Adventure, Adventure Quest and Dungeon Adventure are well presented, supplied with a good instruction booklet (which gives very little away). If you write to them, they will send you a huge hint sheet, cleverly devised so that you don't accidentally find the answer to a puzzle you haven't yet come to.

The adventures are all text only, which will please many people who, like me, think that graphics are pretty, superficial and rather gimmicky. After all, if you've seen a static picture once, you don't really need to see it time and time again, particularly when it resides in memory and wastes valuable RAM. The locations (200+ in all three adventures) are 'graphically' described in eloquent text. They are all, of course, entirely machine coded, and Level 9 use a purpose-built text compressor called 'a-code' which replaces text with signs in memory, and then reconstitutes it on screen. Thus a quart is very effectively squeezed out of a pint pot.

The puzzles in all the games are clever, (reasonably) logical, and artfully devised to keep you coming back. Many's the time I've had to give up at two o' clock in the morning, 'slept on it and come back the next day to solve a puzzle that kept me awake hours. There is an enormous list of objects, some useful and some valuable, to be collected on your journeys, and the answer to a puzzle in the last-but-one location! You really have to use your brain the whole time. In these games, there is no such thing as luck! Well, not much.

Colossal Adventure is a faithful, even better, rendition of the original Crowther and Woods' Colossal Caves with the added bonus of an extra 70 location end-game. Is it worth noting, however, that if you already have a copy of Classic Adventure from Melbourne house, or indeed anything with a picnic area, bird and cage and PLUGH/XYZZY (!) then you'd better be careful not to duplicate a game you've already got, though I suspect that with the end game Colossal Adventure is a better buy.

The objective of the game is to enter the vast Colossal Caves, score maximum points by gathering up as much treasure as you can, rescuing some pitiful elves and living to tell the tale. The game is complex, but fairly easy to map. A word of warning: It isn't easy. As with all Level 9 games, response time is virtually nil, the vocabulary large, and text prolific to say the least.

Adventure Quest has a rather less vague objective: find the Dark Tower and destroy the Demon Lord, Agaliarept, who resides therein. I only completed this game yesterday after a year and a half. The game starts off in the same area as Colossal, so those people are played Colossal will affectionately remember the little brick building, etc, etc. However, after navigating the desert, nearly drowning in the underground river, exploring the underwater churchyard, meeting a Balrog on a rocky bridge over a huge chasm, and solving innumerable other tricks, traps and conundrums, you have far more to think about than mere sentimental memories! What is particularly frustrating with Quest is that you are only allowed to carry four objects at a time, so you often have to retrace your steps to collect objects you couldn't take the first time. This is really excruciating in the desert, but I suppose it's the price you have to pay for such a huge amount of objects.

And now, the piece de resistance! Dungeon Adventure has no less than 100 puzzles to solve, over 220 locations and about 100 objects. Even the most experienced adventurer can expect to get fried a few times here, and end up like a stinking chip! Still, rats don't like stinking chips, so you should be all right.

The adventure takes place immediately after Quest, although you don't need to have played Quest to understand what's going on in Dungeon. It is well documented, and, if you go to the right place in the adventure you can get even more precise instructions. Basically though, the object of the game is to ransack the shattered Black Tower, getting out (alive) with as much loot as you can. Level 9 don't hinder you by only letting you carry four items here. You have a rather cleverly designed packing case to carry everything in. It also stops you getting killed. If you thought the other two games were tough - beware. This is the ultimate text only fantasy adventure.

All the Level 9 adventures show that care has gone into the concept and design of the adventures. For instance, you are never killed outright (what is more frustrating than sudden death, back-to-the-beginning adventures?) You are always given three lives, and in Dungeon, you can, theoretically go on forever. None of their adventures have ever crashed on me, though occasionally the text compressor gets it wrong. Have you ever heard of 'a grate as rusted as y'? Neither had I, until I played Quest. Still these are only minor quibbles, with what must be the best trilogy of adventures on the market at the moment.

Colossal Adventure, Adventure Quest and Dungeon Adventure are available in many shops, or by mail order from:

They costs £9.90 each, and are worth every penny. If anyone needs help, or a complete map of any of these three, please send 70p to Simon Hollands, Woodside Cottage, Graffham, Petworth, West Sussex GU28 0PU.

What is particularly frustrating with Adventure Quest is that you are only allowed to carry four objects at a time, so you often have to retrace your steps to collect objects you couldn't take the first time.