Published in Your Sinclair #21 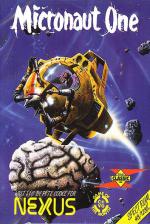 Astronauts swing their thing in space, aquanauts do it under water but micronauts...?

The naughty 'nauts roam the tunnels which run through the organic, artificial brains of the biocomputers. And there's one very good reason for venturing into the grey matter of the galaxy - bugs! Not the sort of things that make a shoot 'em up crash every time you pass a zillion points... I mean real yucky nasties which hatch into grubs before growing into jellyflies.

Jellyfiles? Well only if you throw it. If you zap it, it vanishes, which stops it spinning a web across the tunnels and laying eggs which hatch into more larvae and - you guessed it! Isn't nature wonderful in the way that it adapts to produce a parasite capable of living on the very highest tech level?

These parasites go by the name of the Scrim and are descended from fruit flies. Their presence is far more than mere irritation because, for all the wonderful bio-engineering, the computers are highly unstable and the presence of impenetrable webs makes maintenance difficult, if not downright impossible.

You can't just leave the biocomputer running or it'll overheat faster than a Commodore power supply. What you've got to do is reach one of the four Energy Transfer Units and either drain off or pump back some power. This means you're going to be a busy little micronaut, with bugs to kill and systems to stablize.

How nice to have a game where the scenario makes some sort of sci-fi sense, but then again, Pete (Tau Ceti) Cooke has always been one for the credible plot. He's also a fine programmer, which means that your race round the passage is in just about the fastest, smoothest vector 3D seen on the Speccy.

The three stages of the nasties are well animated too. I particularly liked - or rather, particularly didn't like - the crawling, maggot-like larvae. Definitely yucky! And be prepared for a top speed chase if you encounter a jellyfly. There are also roaming service droids - at least, I think that's what they are - which get in your way unless you zap them.

The game's other elegant feature is its use of menu control complete with windows. You reach the options bar by pressing Break at any time during the game, and that's where the fun really starts.

Your ship contains a lot helpful devices, first and foremost of which is a map of the tunnels. But this is more than an A to Z of the bio-brainbox. You can ask it to display a course to a sector, or perhaps one of the ETUs, and then an arrow on the control screen will indicate which way to go.

There's also an ETU panel which lets you see the state of each of the Energy units, though impending overloads are also indicated by a scrolling message on the dashboard. You stabilize the ETU that you're docked with from this screen. Add to this a quick introduction to the Scrim - a sort of instant know-your-enemy guide - and a notepad for jotting down where potential hazards lie and you're all set for a deadly time.

The game's greatest failing is killing things. It's too hard! Instead of a laser, plasma cannon or photon-blaster, your ship's equipped with a Van Der Graaf Generator.

Unluckily this particular piece of kit puts a heavy drain on your power supply, and before you can say Mallory you'll be searching for an ETU to drain or perhaps a floating cloud of energy. The problem is that it takes several shots to zap even the vulnerable larvae, and despite the aid of a targetting computer, the damn things wouldn't die before my batteries did.

I'm not sure whether this isn't a bit too tricky, but I'll give it the benefit of the doubt, because if you can beat the bugs on one level you head up to higher things, a greater menace and an even bigger brain... which is probably called Rachael!

Fast maze and shooting game with incredible graphics and a great plot, but rather too difficult for comfort!

A fast maze and shooting game with incredible graphics and a great plot, but rather too difficult for comfort!