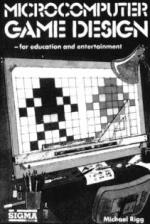 The educational value of games has been discussed in the computer press but little has been said of any practical value. Microcomputer Game Design, by Michael Rigg, develops the theme and shows that most of the effort of producing a game is in design.

Unlike many writers, Rigg does not treat any one language as inferior to another. They all have their good points and even Basic has some advantages.

The book deals with some unusual languages, such as Prolog and Comal, showing that they can have some importance in the area of games design.

Once through the process of design, coding and debugging - three processes which can often happen simultaneously - the author looks at the aspects of design such as graphics, colour and sound. He uses the Melbourne Draw program, available for the Spectrum, to create background displays, and then shows how best to cope with hundreds of Beep commands in an effort to produce interesting sound.

Following that, Rigg launches into the design of an adventure. Although the emphasis is on programming your own adventure - on any machine - the author does talk about utilities such as The Quill and how it is better to use them if you do not require any stunningly original effects.

Rigg produces an entire game - called Jason - from plan to program and demonstrates that The Quill and other such utilities are more than tools for amateur programmers.

If arcade game designers are feeling left out they need not fear. The book includes a section on Ocean's White Lightning which creates background graphics and sprites using a language similar to Forth.

Machine code is, justifiably, the last aspect of game design to be dealt with by Rigg. There is nothing new in the section, but the author points the beginner in the right direction. Sparse details are given of number bases followed by basic information on such machines as the Spectrum and the Commodore 64.

The book shows that although playing games may be educational, writing games is more so. Rigg has a natural and lively sense of humour which pervades the explanations.

Rigg may not turn you into a programming genius but his book will show you where the first signpost is.

Rigg may not turn you into a programming genius but his book will show you where the first signpost is.
Logout