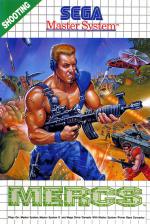 Poor old Mr Reagan. He's finished being president of the USA, but still those terrorists won't leave him alone. They've gone and kidnapped the senile old duffer and are threatening to kill him if all America's nuclear missile codes aren't handed over to them. Obviously, the government aren't going to waste any of their proper soldiers on the inevitable rescue bid, and so they hire you, a top mercenary, to do the deed.

This means you wander up the screen in the style of the old game Commando and shoot everything. This includes enemy soldiers, enemy tanks, enemy jeeps and even enemy trees! A fair smattering of collectables are yours for the taking, should you find them, and these should doubtless aid you in your battle against a huge piece of war machinery at the end of each level, such as fighter planes, battleships, helicopter gunships and a giant bomber.

Can you save the ex-president and dispose of the terrorist threat? Remember, the entire free world is depending on you.

Should those African revolutionaries gang up on you in frightening numbers, one press of the B button unleashes a Megacrash smart bomb, annihilating everything in the area! These bombs also cause grievous bodily harm to any armoured vehicles or end-of-level bosses hanging around up to no good.

Dotted around the landscape are abandoned enemy vehicles, just waiting to be commandeered by the player. Once you're in, these vehicles protect the player from a number of hits before exploding. Jeeps, rafts and tanks are just a few of the vehicles found throughout the game.

Our rock 'ard Merc is certainly well-endowed in the weapons department. Check out this lowdown of mega-destructive weaponry!

1. Rocket Launcher Takes a short while to reload, but very powerful indeed.

4. Machine Gun Rapid-fire weapons don't get much better than this.

This conversion of Mercs is well decent, with some of the smoothest scrolling I've seen on the Master System. The action is tough and addictive, with plenty of things to blow up and enough enemies to make life difficult and death rather easier! The graphics and sound aren't outstanding, but it's the gameplay where this is strongest, and there's certainly plenty here to keep a Master System blastaholic happy for quite some time.

I must admit that I was pleasantly surprised by this version of Mercs. The scrolling is super smooth, there are plenty of things to shoot and some cool power-ups to collect. The graphics are good with plenty of variation between each level, and the sound, although not brilliant, is pretty functional. The only problem I really have with it is hat there's not much in the way of enemy soldiers to blast in oblivion, and some of the bosses are a tad weedy to say the least. However, although it has its faults, there's no denying that Mercs is very enjoyable, and well worth investing in if you're after a decent shoot 'em up.

Presentation 59%
Two or three still screens within the game, and a single option to tweak.

Graphics 74%
Pretty blocky, but there's plenty of variation and colour in the game.

Sound 51%
A rather sad attempt at two of the coin-op's tunes, along with mundane effects.

Lastability 80%
...and pretty difficult as well, meaning that there's quite a lot of play to be had from this one.

Overall 81%
A good conversion of an outstanding coin-op that should appeal to anyone after a decent shoot 'em up.

A good conversion of an outstanding coin-op that should appeal to anyone after a decent shoot 'em up.