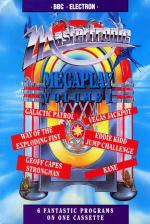 Mastertronic is one of the few companies in the BBC/Electron market which refuses to move with the times. To be fair, this is a compilation of some very old games, written in the days when almost any game was a winner. The package, apparently only available on tape, comprises six of the most boring games it has ever been my misfortune to review.

The first is Galactic Patrol and provides a simple exercise in destroying aliens. Next is Vegas Jackpot, which presumably means it involves gambling of some kind. But it failed to load, so I shall never know.

The Way Of The Exploding Fist is the best game on the tape. A standard martial arts game, with a complex set of keys to press. Sadly they aren't redefinable. But the game is bearable and a two-player option is available.

Eddie Kidd's Jump Challenge is the worst of the lot - a creative use of boredom. The idea is to jump over various obstacles on your motorbike. However, the run-up takes almost a minute; you are treated to trees and fences drifting by while the white lines on the road zoom past at an astonishing speed. When at last I was woken by ramming into barrels, I realised that I had missed my chance to jump.

Geoff Capes, Martech's Strongman challenge, makes an appearance too, but all I managed to succeed in doing with my newfound muscles was dropping a car onto my badly drawn figure's head - thus squashing myself flat. Finally, Kane 'entertained' me with atrocious music, pointless graphics and a boring challenge.

Most compilation reviews end with the words 'represents great value for money'. But not Mastertronic's collection. I doubt if any discerning games fiend would want to buy it.

I doubt if any discerning games fiend would want to buy this.