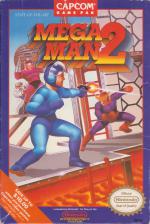 Dr Wily is a bit of a naughty chap, isn't he? After somehow escaping the near-fatal pasting you gave him in Mega Man 1, he's back - but with eight more mechanised meanies to protect him. Enter Mega Man, a streetwise super-robot fresh from success in the original game. He decides that the evil Dr Wily must be taught a lesson once and for all.

Before departing on his voyage of destruction and platform leaping adventures, Mega Man pauses only to scoop up his Electro-Death Cannon and communications unit, so he can keep in touch with his creator, Dr Light. There are nine levels in Mega Man 2. Eight of them are the stomping grounds of Wily's robo-cronies and these can be played in any order. Level nine (Wily's domain) can only be visited when the other eight have been conquered and there's plenty of surprises still to be uncovered once you get there!

Dr Wily's new, improved meanies aren't exactly the most hospitable folks in the game to say the least. Each has a powerful special weapon that could spell doom to our Mega hero! However, beat them up and Mega Man confiscate their weaponry and use it for his own ends.

So you think that nine levels of platform excitement isn't quite enough for you? Think again! Mega Man 2 uses every dirty trick ever seen in any platform game!

Take Heat Man's stomping ground, for example. Here, platforms have a perculiar tendency to suddenly disappear from under our hero's feet - just when the next step to safety appears! Air Man's level is another good example of the type of dirty tricks this game has in store for you.

Mega Man has to jump onto moving platforms, which may not sound too strenuous, except for the fact that an enemy sprite is already on there ready to attack! And once the first eight levels have been completed (and there's literally months of play in doing just that) there's another surprise in store.

Dr Wily's castle isn't just one level. It's been split into four smaller sub-stages, each packed with some of the most fiendish platform puzzles yet seen in a console game!

Shooting the enemy sprites usually yields some kind of mega bonus that Mega Man can collect. The majority of power-ups come in two sizes, and obviously alrger icons are liekly to have more of an effect than smaller ones.

Energy pearls and weapon re-energisers are two of the more frequent icons. But lucky players may be able to find extra men and special pods that enable Mega Man to claim extra energy - very useful if the end-of-level boss is giving our hero a bit of aggro.

Switching between your amassed weaponry couldn't be easier. Simply pressing the start buttons pauses the action, and it's here that you choose your new weapon. you can tell when the new weapon has been selected, because Mega Man's chameleonic costume changes colour.

Your stored energy canisters and Dr Light's useful gifts can also be utilised on the pause screen, before getting back to the real task of giving Dr Wily a right royal kick up the backside.

Every time I play Mega Man 2, I just seem to like the game more and more! Everything required to make a platform game incredibly entertaining has been crammed in.

The graphics are varied and possess amazing detail. The sprites are probably the best I've seen in a Nintendo game. The sound can't be faulted either with great effects and tunes.

But it's the playability that really makes this game so brilliant. The programmers must have spent months racking their brains to come up with the mind-warping puzzles seen here.

I'll put this simply. Mega Man 2 ranks as one of the greatest NES games I've ever seen, with unsurpassed addictive qualities. Buy it as soon as possible.

Wahey! Mega Man is back, and this time he's brought... er... I don't know. What has he brought? Well, fab graphics for one thing. The sprites and backdrops are absolutely stunning - just feast your eyes on the screenshots and see what I mean!

My favourites are the fire-spitting robo-dogs which wag their tail when they're roasting you!

Like the original Mega Man, the gameplay is beautifully balanced, letting you get just a little bit further into the game each time you play. There are some incredibly tricky parts of the landscape to negotiate, and you have to do a fair bit of thinking to work out how to get past them - but there's always a way!

Mega Man 2 is one of the finest platform games ever seen - invest your Christmas money in it now!

Presentation 93%
Great intro screens and a superb feel to the game itself.

Graphics 96%
Probably the greatest variety of backdrops and sprites yet seen in a NES game - and they're all brill!

Playability 96%
Mega Man is a joy to control, and getting your hands on the extra weapons makes it even better!

Lastability 93%
Nine levels to keep you going and they aren't easy. If you do complete the game, why not try adjusting the difficulty level?

Overall 95%
A totally amazing NES platform game that simply must be purchased a soon as possible!

A totally amazing platform game! It ranks as one of the greatest NES games I've ever seen.