19th November 1987
Masters Of The Universe
By Gremlin
•
Spectrum 48K 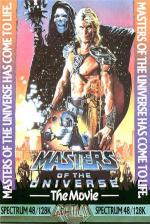 To date there have been two He-Man games, one an adventure and one an arcade game. Both have been only marginally successful, so when Gremlin announced they were releasing a third game on the exploits of he of the furry knickers, a murmur of "Oh no, not again" swept across the nation. "But," Gremlin insisted, "this one will be good. The plot is there for us already and surely the publicity of the movie will help us shift it?" So they went ahead and wrote it, and I'm happy to say that the nation is wrong and the game is quite good.

The film itself follows the adventures of He-Man, Teela and Gwildor as they fall through a Time gate (a portal to another world) and emerge in modern day California. Also fallen through the Time gate is the Cosmic Key itself, the key to time travel, and it has fallen into the hands of two unsuspecting college students. They are, of course, incredibly thick and accept the situation immediately as a walking skeleton with rippling muscles, a tall Russian/American body builder with a sword that is most likely illegal and hair extensions, and a horde of Darth Vader lookalikes just appear from nowhere.

The film builds up to the battle between He-Man and Skeletor to gain control of the key. But on to the game. You take the role of the mighty muscle himself, and must collect the eight parts of the key, some of which are scattered about the city and the others which are kept by Skeletor's henchmen. Whilst racing around the city collecting the musical chords that make up the key, you are contacted by one of your companions telling you to go somewhere. For example, first you have to go to a scrapyard where you engage in hand-to-hand combat with two henchmen and by defeating them you receive a shord.

The next place you are sent to is Charlie's Music Store, where it's a shootout between you and seventy skeletons. After that it's a quick zoom over the rooftops in a flying disc and finally, if you have all eight chords, it's a battle to the death with Skeletor.

The look of the game is first rate all the way through. To save memory, when in the streets, the screen scrolls vertically only. When you try to go sideways, the orientation of the screen chances. While confusing at first, you get used to it and before you know it you are using the free map included with the instructions to get around like it was second nature. The streets themselves are detailed, with pavements, sorry, sidewalks and buildings and there is even a graveyard complete with tombstones. The fight in the scrapyard in the second stage is beautifully done. The characters are large, clear and very, very recognisable. The animation is first class too, and unlike most side-view combat games, you no longer duck to avoid a punch, you dodge, which results in He-Man leaning to his left in a most realistic way. The two assailants are very difference in appearance and forms of attack. One, the hairy one, will just walk into the attack, and the other one, the bald one, stands back and fires bolts at you.

The third section, the shootout at Charlie's, is not all that hot. In fact, it's pretty primitive. Just a stark building with a few empty windows forms the backdrop and tiny little robots jump up and down firing at you. You control a little crosshair and have to take out seventy of them before they take you out.

The disc fight is set above the streets which are the same as before, only you are in a disc and move a hell of a lot faster than when you were on foot.

The game itself is an excellent conversion from the film and is fun for a while, but it is easy. Like the movie, you'd probably get bored with it unless you are a real "He-Maniac".

A very playable conversion that captures all the atmosphere of the movie but falls on being a little on the easy side.

A very playable conversion that captures all the atmosphere of the movie but falls on being a little on the easy side.