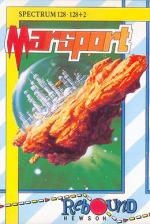 It's 2494, and Cuchulainn's great-great-great-great-great (ENOUGH! -GT) grandson Commander John Marsh is the only hope of saving Mankind from the revolting slimy Sept. Substitute space helmets for swords and aliens for gremlins, and you'll have Marsport. The basic layout, clever animation and detailed background design is very much in the same vein as Tir Na Nog and Dun Darach.

While the Earth and Moon are surrounded by a force field. Mars has fallen to the Sept invaders. You must retrieve the plans for improved field generators from the Marsport Central Computer. Unfortunately, the computer is very keen to defend itself, and can't tell the difference between you and the Sept...

As usual, you have a four-way view, detailed scrolling backgrounds and the opportunity to find and utilise various weapons and tools. You have three main objectives; locate the computer, find the plans and escape. Along the way you'll have to fight the aliens, who are invariably hostile, and robots, some of which are aggressive guardians while others are helpful information gatherers.

Supply units are your main source of useful objects, so look out for them. Lockers can be used to store objects once you have found them. Charge units will replenish your power, while Factory units assemble two or more objects to manufacture a more useful tool.

Cuchulainn in space; even better than Tir Na Nog.

Cuchulainn in space; even better than Tir Na Nog.