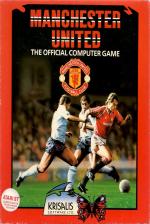 Manchester United on the Atari ST follows the same lines as the Amiga version which we raved about last month. It's a cross between an arcade footy game and a management simulation, with you taking on the ominous role of Alex "Oh dear, we're two points away from relegation" Ferguson and his team. This version sports the same sensible use of icons, the same stack of beautiful graphics, both digitised and otherwise (although there are one or two minor omissions), and the same delightfully challenging gameplay as the Amiga version.

In fact, apart from a drop in sound quality and a lower disk access time which can get annoying at times, there's nothing to distinguish the two versions!

A brilliant football management-cum-player sim which other, forthcoming soccer games will be hard pressed to beat.

A brilliant football management-cum-player sim which other, forthcoming soccer games will be hard pressed to beat.