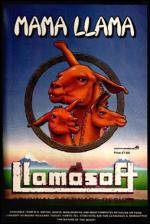 We make no excuses for delaying our review of Jeff Minter's new game. He has been a harsh critic of reviewers who don't read game instructions before they write - and before you start playing Mama Llama you have to read Jeff's very own version of War And Peace before you can load up the game.

He describes it as a very unusual video game. And it is. It must be the only game around which gives the player the chance to change the structure around quite so much.

You can set up each game you play exactly as you wish - which gives the beginner a chance to get into the game and an expert the chance to really show off.

The basic idea of the game is to protect Mama Llama and her twin babies, who find themselves in various hostile locations, using the unique KillDroid facility.

Jeff's continuing fascination with gravity also gets a look in as the different locations have varying gravity factors.

The game comes in two parts - the initial "grid" phase in which you select which wave location you wish Mama Llama to visit and the main "wave" screens themselves. Some waves are simply shoot-'em-up screens - but others are puzzles. The graphics are bright and bold and the sound - with musical arrangements credited to James Lisney - are nice too.

Mama Llama is a game for dedicated Minterites. Lesser mortals might find it a mite too complex for them. It's essential to read the detailed instructions before you even think about playing. Me? I still reckon Ancipital is Jeff's best game to date.

Mama Llama is a game for dedicated Minterites. Lesser mortals might find it a mite too complex for them.