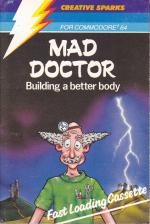 Mr. Franz Johann Blockenspiel is intent on creating a living creature out of the pilfered remains of the citizens of nearby Struddleberg. Why? Because he's mad, and as such, it seems only reasonable to call this arcade adventure from Creative Sparks' Mad Doctor.

To complete this task, Blockenspiel must collect the bodies of hapless citizens to operate on, so as to create a monster. Various other objects are also needed in this grisly manufacturing process, like a bolt for the monster's neck (found in the darker recesses of Herr Doktor's dungeon). There are ample spare parts to be had in the graveyard but if you prefer your corpses fresh you can always knock off a few of the locals!

When on the prowl in the village you should study your victims carefully as a sub-standard corpse could ruin your chance of the perfect creation.

You start the game in the castle, hungry and thirsty but with food and water conveniently within reach. Once you leave the comfort of this foreboding abode, a map screen appears showing all the six separate sections of the village and the locations. The map is in the form of a full screen plan and each of the sections are presented as into-the-screen 3D views when entered.

Movement of Blockenspiel is through joystick and the fire button accesses a command line, allowing you to perform actions relevant to your current situation, For example, when you are hungry and are near food, you will suddenly find that there is an option at hand to enable you to eat the food.

At the bottom of the screen there is a status line with bars to show your health and energy and the 'villager status'. The latter changes from suspicious through to nasty as Blockenspiel's dastardly crimes are perpetrated.

Obviously when the villagers are angry and you meet one in the street they're not likely to want to shake you by the hand, but your throat!

When the monster has finally been completed he needs some life injected into him and so he must be taken to Lightning Hill, where the 'Spark of Life' can be added. Having done this he will have to presented to the people in the village hall. Depending on the quality of the monster made, you will either be hailed as a genius or hung as a murderer!

This average piece of software brought me no end of frustration. On playing it for the first time I complete all that the instructions told me to, well nearly - the monster was built and placed up on Lightning Hill to receive the "Spark of Life" but what happened...?

Not a lot. I wandered around, trying a variety of different things but still no "Spark of Life", just one very peeved scientist - me!

After repeating this process four or five times I just had to give up through frustration at being so near and yet so far... I must admit collecting corpses sounded appealing (just like chucking out time at the Ludlow local) but overall the game was a bit naff.

There you are presented with a nice little 3D backdrop fading into the distance when you decide to move 'into' the screen. The man walks away and doesn't get any smaller! So much for perspective graphics - it ruins the whole effect!

I also found that the joystick didn't respond too efficiently on moving and when selecting commands. Mad Doctor would have been worthwhile had it been released as a budget game, but at this price anyone who buys it needs to see a doctor!

When I first saw this game, I thought it was a rather poor offering from the Creative Sparks "Sparklers" range. After finding out that it was actually a Creative Sparks release I was quite shocked - some of their £2.50 budget games are of a better quality than this!

The graphics are pretty poor, as is the sound, and the game itself is very limited and repetitive to play. Mad Doctor is a veritable attempt at a new style of arcade adventure that hadn't been entirely successful in terms of playability and would subsequently benefit from being considerably cheaper.

On reading the instructions provided, this sounded as if it would turn out to be a suitably sick, but fun, arcade adventure. It's only on playing that one finds this isn't entirely so.

Both the scenario and approach to the adventure side of things are refreshingly original but only the former seems to have worked. It becomes quite miffing to have spent several laborious minutes collecting corpses and building a monster, to find that bringing it to life isn't quite as easy as the inlay makes it out to be.

The poorly defined and badly animated sprites don't make the game any more enjoyable to play, neither does the weak sound - at least the 3D locations look nice.

As it stands I think the game needs life injecting into it more than the monster does.

Sound 26%
Weak with few sound effects and no music.

Hookability 62%
Initial interest in building a monster from dead bodies...

Lastability 39%
...but you soon find that the game's as dead as the corpses.

Value For Money 36%
Should have been a Sparkler.

Overall 40%
Not so much of a creative spark; more of a damp squib.

The game's as dead as the corpses! This is not so much of a creative spark; more of a damp squib.