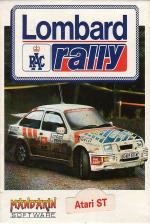 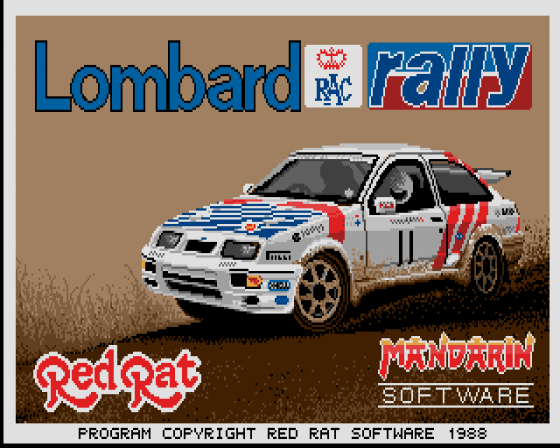 The first RAC Rally was held back in 1932, and since then the competition has grown steadily to become one of the premier international rallies. It's a tough and demanding race, and tests the drivers and cars to their limits.

Mandarin's latest release is a simulation of the rally, and allows armchair racers to take the wheel of a Ford Sierra RS Cosworth and enter the rally without need of sponsors or a hefty registration fee.

At the start an option screen is displayed, allowing the player to enter a full rally, drive each of the five legs separately (each leg has three consecutive stages), visit the workshop, attend a TV interview, practice racing, or watch a demo. 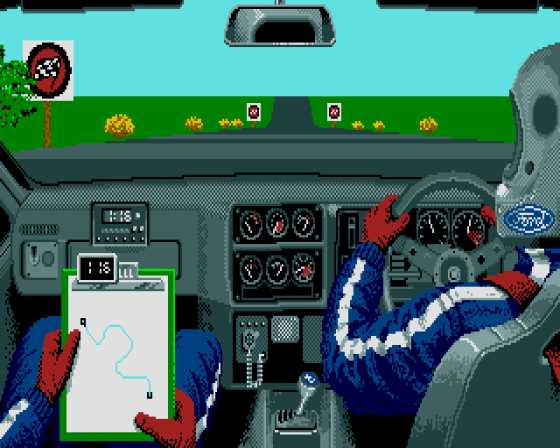 Visiting the workshop allows repairs and improvements to be made upon the car, from buying new engines and installing four wheel drive to honing the suspension and tuning the engine. The car is broken down into four components: engine, wheels, bodywork and suspension. Each has a percentage representing its current state of repair. As improvements are made, the percentage is increased (costing £1 for every percent improvement). Naturally, the better condition the car, the faster and more reliable it is - let the damage go unrepaired and the chances are that the car will either break down, or won't be fit to enter the rally.

All these repairs cost money, and the only way money can be earned is by either winning races or by attending a TV interview. The latter is, in fact, a series of racing trivia questions: answer correctly and a wad of dosh is yours; wrong, and it's into the race with no improvements. There's a limit of one TV interview before each race.

When the required improvements have been made, the race begins - either a full rally, or a single stage. The road is viewed in 3D from a very unusual viewpoint - between the seats of the driver and co-driver. This means that, as well as seeing the road and all the dials on the dashboard, you can also see the co-driver's clipboard, upon which is a course map and a stopwatch. The interior of the car is nicely drawn and the driver is well animated when he changes gear - yes, he does that! 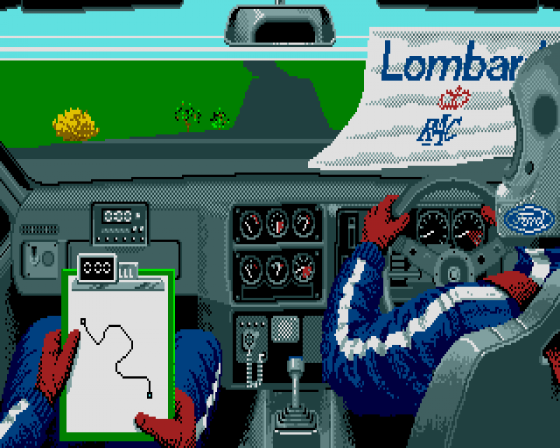 Control is straightforward: left and right steers, and forward and back accelerates and decelerates. Fire and forward or back changes gear - going up through the gears is smooth and realistic (you have to keep an eye on the rev counter), but the action of changing down causes an excessive loss of revs, and the car tends to slow right down. This can be annoying, and I also would have liked an option to change from fourth to second.

The road is twisting and hilly, and this is displayed very convincingly with a smooth 3D update. Roadside obstacles and other cars aren't particularly well drawn, but the overall effect is realistic and gives a great feeling of exhilaration.

The rally takes place over five legs, each of which comprises three consecutive stages. To get a placing, all three stages have to be completed within a specified time limit. Cash prizes are offered for first, second and third places - nothing for less. The stages vary from normal road conditions to mountain routes, and even through the night. Weather conditions vary, making offroad tracks slippery, and fog can even descend (and if you haven't bought a good set of foglamps, your vision is impaired!).

The car can take a certain amount of punishment (crashing into roadside obstacles causes it to stop, and minor damage is sustained) but crashing off the side of a mountain or repeated asccidents causes irrepairable damage, and the car is disqualified from the race.

The player may race as often as he likes, but must ensure a regular supply of money to keep the car in good repair, and also to buy equipment to gain advantage over the opposition.

Programmers Rad Rat have incorporated quite a few novel features into this simulation to make it different from the multitude of other computer race games on the market. The trivia option is both educational and fun, and having to keep an eye on your money and the condition of the car adds plenty of depth to the action.

Racing itself is fast and thrilling, with the best controls I've encountered in any computer race game. The highly convincing car interior (every dial works) and the realistic driver work extremely well and the whole thing is enjoyable, thoroughly engrossing, and comes highly recommended.

Racing is fast and thrilling, with the best controls I've encountered in any computer race game. 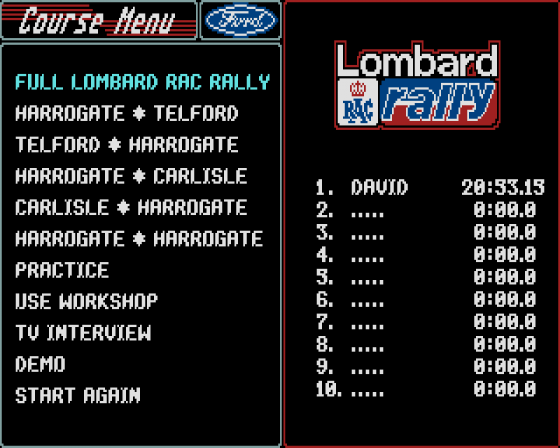 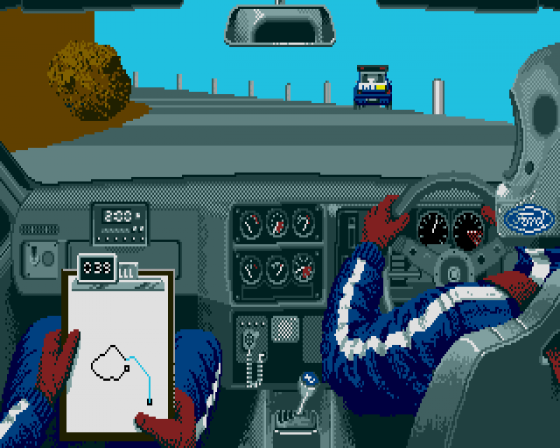 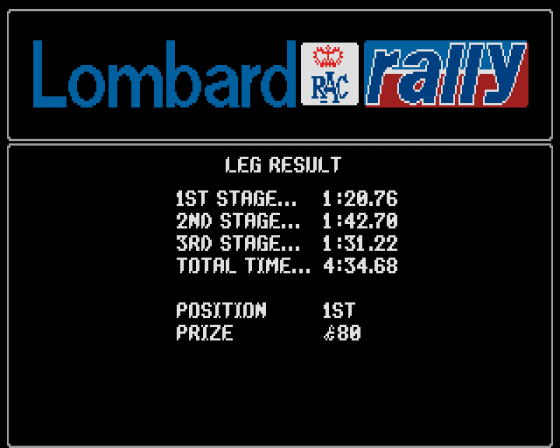 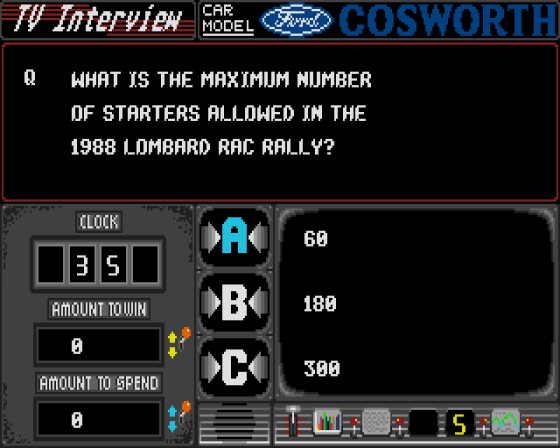 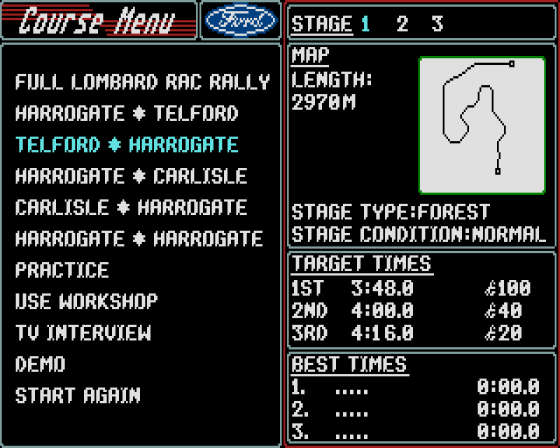 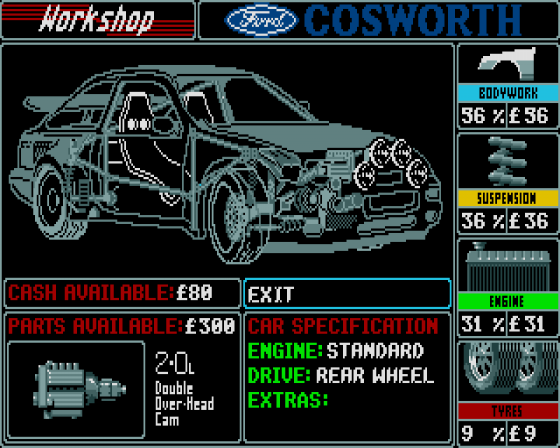