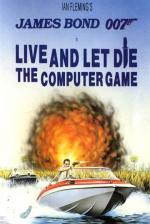 The world has ignored the troubles of the small Caribbean island communities for too long. Now there's a crisis. Dr Kananga, the Prime Minister of the island of San Monique, has long kept his rule by the use of voodoo and tyranny. Now he's spreading his nefarious deeds by shipping heroin to the United States. He plans to flood the market and undercut the American dealers to provide military funding for San Monique which, incidentally, is allied to the Eastern Bloc.

You take the part of 007 James Bond (no more introductions necessary, I presume) in an attempt to infiltrate Dr Kananga's (or 'Mr Big' as he is known) headquarters and put a stop to his plans.

Q has furnished you with a super-speedboat, fitted with canons and a rocket launcher, with which to battle through Kananga's defences. Obviously a boat like this costs money, so they don't let you go haring off into battle straight away, but give you a chance to perfect your skills in a series of training missions.

The first practice tests your aiming proficiency with a series of floating targets: red, to be shot by cannons, and black, only to be taken out by missiles. The next puts you up against simulated boat and aircraft targets, enabling you to get used to the type of action you may be encountering.

Prove your ability and you might be allowed on to New Orleans where you must enter the final battle with Mr Big's minions. Oooh!

Hmm - an interesting little number, this. Not good enough to have you leaping out of your seat, but not really bad enough at all to put you off. Is it like Buggy Boy?

Well, yeah, but it's not quite as good. The water's not only replaced the track - it seems to have drowned all the flags and obstacles as well. What you're left with is a watered down version (geddit?) of my favourite race game ever and that just isn't enough to really appeal.

Right. Those are the bad bits, now for the good: the 3D is pretty nifty and there's enough gameplay to keep you at it for quite some time. It may not be as good as the game it resembles so much, but Live And Let Die is still good fun.

It's not not the same without Sean Connery, though - sniff.

There seems to be some sort of creative block which prevents Domark from coming up with anything exciting in their James Bond games, since Live And Let Die is the latest in a line of dull games with tenuous 007 connections.

The 3D effect is fair enough, nipping along at a brisk enough pace to be effective, but the game itself hardly evokes any atmosphere due to the sluggish control method and tedious delays.

Actually, I think that using this as a James Bond licence is a bit of a con, as the boat scene of Live And Let Die is only a small section of the film.

I must say I expected more than an average 3D game from the programmers of Buggy Boy.

Graphics 63%
Fast enough 3D, but the sprites are rather blocky and indistinct.

Lastability 67%
It's appeal is rather short lived.

Overall 70%
A playable, but not outstanding, 3D race and shoot-'em-up which doesn't have all that much to do with James Bond.

A playable, but not outstanding, 3D race and shoot-'em-up which doesn't have all that much to do with James Bond.