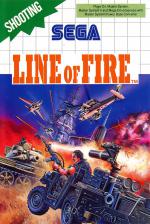 Life's tough when you're a prisoner of war, unless of course you find a secret mega-powerful machine gun stashed in your cell! Once in possession of this powerful weapon, it's simplicity itself to shoot your way out of prison and commandeer a jeep to get you home. This rather improbable set of circumstances are thrust upon you in Sega's conversion of their arcade blaster, Line of Fire.

However, the enemy forces want their gun back and they're not afraid to shoot you into oblivion to get it! This means you take on the entire opposing army single-handedly with nothing but your machine gun and a stack of missiles to help you. After all this destruction, there's still a massive guardian awaiting you at the end of each level. Blast this out of the known dimensions and more of the same machine gun based violence awaits you on the next stage.

The Master System conversion of Line of Fire differs somewhat from the coin-op. Whereas the arcade machine was a 3D Operation Wolf-style first person perspective machine gun game, this version is an up-the-screen blaster! However, the levels, enemies and guardians themselves follow the coin-op quite closely.

There are two types of weapon in Line of Fire. Your machine gun disposes of ground-based forces, such as foot soldiers and tanks and is provided with an infinite supply of ammunition. Missiles are used to destroy flying targets such as bombers and helicopters.

Your opponents arrive in many and varied forms. There are standard troops who shoot at you with their rifles, other jeeps armed in a similar fashion to yourself, twin tanks, helicopter gunships, dive-bombers, frogmen and even fully-armed battleships!

Escape from enemy territory would be impossible without your trusty jeep, for it is no ordinary form of transport. When faced with ramps, your motor vehicle uses them to fly for a limited period of time, and not even the sea is an obstacle for your dependable four-wheeled friend, as it is capable of transforming itself into a fully operational battle dinghy! The last level of the game sees another Transformer-like change, this time into a fully-functioning helicopter gunship!

I was very surprised when I played Line of Fire. Surprised and disappointed. Changing the viewpoint of the game was hardly an intelligent move. Dynamite Duke showed that the Master System can handle 3D Op Wolf games, so why waste the license on turning the game into a poor example of a vertically scrolling shoot 'em up? On the plus side, the maps of the levels do follow the coin-op quite closely, although the sprites are so small and badly drawn that it's difficult to tell. The game is also very slow and far too easy. The action gets tricky at one point in level two but otherwise any semblance of challenge is missing. Not even fans of the coin-op will enjoy this. In fact I think they'll be the most disappointed.

What a bizarre "conversion" this is! Line of Fire is similar to Enduro Racer in that the first person 3D effect has been altered - in this case to Commando-style vertical scroll-o-vision. However, the actual locations and scenery remain much the same. Unfortunately, much as it pains me to say it, sadness has prevailed in this conversion. The vertical scrolling is slow and jerky and the graphics are seemingly malformed, with badly-defined sprites and tedious backdrops. The sound effects and music are similarly bad (in fact, I defy your hand not be to be moved to the volume switch within seconds). The simple gameplay is quite entertaining, but it won't keep you playing for long (in fact it only took me one go to get all the way to the last level). I simply can't recommend this at all. If you've a hankering for Op Wolf-style action, try Op Wolf (or Dynamite Duke). Fans of up-the-screen blasters should check out Xenon 2.

Presentation 52%
Three skill levels, intermission screens but nothing else to speak of.

Lastability 38%
Very easy indeed. Even a spaz with sad gamesplaying skills should be able to complete the game in a hour, even on the most difficult setting.