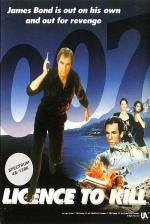 The names Berkmann, Dr Berkmann. Enormous weapon and licence to review. Hey, did you know that this film was originally going to be called Licence Revoked, but had to be changed to its present title because not enough Americans knew what revoked means? HAHAHAHAHA. It's true.

I've always felt a bit sorry for those Domark boys with their Bond games. I mean every time a new Bond movie comes out, you know sure as knees are knobbly that it'll be about a femtosecond before the Speccy version is out, with loads of posters, amazing packaging and a completely crap game inside. Trouble is, now everyone thinks that every Bond game is going to be a pile of jobbies, so it doesn't matter how brillsvile it turns out to be - no-ones going to want to know.

They deserve it, of course. A View To A Kill was dreadful, Living Daylights wasn't much better, and the other one was so bad I can't even remember its name.

Still, its a bit of a pity, because, this time, they've been and gorn and done it. Against all expectations, Licence To Kill is a pretty nifty game.

Now, it ain't original. Countless vertically scrolling shoot-'em-ups from Commando on are the clear inspiration, with the multi-mode sophistication of Vindicator an obvious recent model. But Licence To kill obviously has to link in with with the plot of the film, and that Domark has done very well. All sorts of action sequences have been plucked from the movie and transferred. So for instance there's the exciting helicopter chase, as Bond and Felix "Is that a face lift or what?" Leiter chase Sanchez and his extremely fruity girlfriend (slaver drool slurp) in their jeep. There's the bit when Bond hangs from the 'copter trying to clamber onto Sanchez's plane, and then there's the... what? Haven't you seen the fillum? Clot. Go and see it right now.

Anyway, it all adds up to some action-packed nonsense which whiles away the time quite nicely - and that applies to both film and game. There are six sections, all slightly different, but all in the same vertically scrolling mould. First up is the helicopter bit. There you are, chasing Sanchez and trying to avoid being shot down by the various gun emplacements along the way. Well, anyone who's played Vindicator or a trillion other games will know what to do - shoot up those gun emplacements. But be careful too not to crash into any buildings along the way. If you feel like just whizzing past and trying to dodge the bullets, you can accelerate and take your chances.

This, though, is one of those gamelets which depends on knowing your terrain. At first it's pretty tricky but with practice becomes easier - and any damage you sustain is not carried over into the next section (although lost lives are).

Next up, Bondy's on foot. Shaken (but thankfully not stirred) by a number of explosions going on around him, he dodges bullets and tries to knockk off his many assailants. Unfortunately those oil drums he keeps standing behind have a tendency to blow up, which makes this section a good deal trickier than it may first appear. You can shoot only in one direction, although by holding down the fire button you can change that direction. As most of the baddies come from above, you'll soon find that shooting straight ahead is your best option for staying alive. This is definitely the best section of the game - getting through it is a genuine challenge.

And the next one please. In Part Three, Bond finds himself lowered by rope from the helicopter as his enemy Sanchez tries to zip off to Cuba in his aircraft to stock up on cigars. You're guiding the chopper (oo-er) and the idea is to get as close to the back of the aircraft as poss so that Bondy can, attach the towrope to it (yo ho ho). Difficult. Especially as you lose control through the clouds.

That's as nothing, though, to the next sequence, which finds Bond going for a quiet swim and accidentally on purpose running into some drug smugglers. They start chasing him, but not terribly efficiently it seems, because he's perfectly capable of evading them if he's clever. Dive below the surface, and mere are divers chasing you (and of course you can only hold you're breath for so long...). Glub along on the surface again and you could be shot by the baddies on the boats. Needs good judgement!

And so it goes on. In fact there are two more sections to play, one in which you try your hand at a bit at water ski-ing, and the last in which you've got to blow up an army of trucks in an attempt to rid Sanchez of his drugs stash. But try as I might, I haven't managed to get that far yet! I will, I will...

Yeah, it's good. Not as good as Sean Connery but better than George Lazenby. And it's streets ahead - towns, even - of Domark's previous Bond releases. As Q would say, "Now pay attention, 007..." - (Eh? Ed)

Surprisingly playable and addictive Bond tie-in with six separate gamelets, all in a Vindicatorish shoot-'em-up mould. Hopelessly unoriginal, of course, but neatly put together.

Surprisingly playable and addictive Bond tie-in with six separate gamelets, all in a "Vindicatorish" shoot-'em-up mould. Hopelessly unoriginal, of course, but neatly put together.