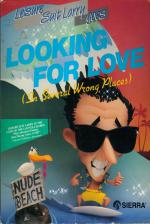 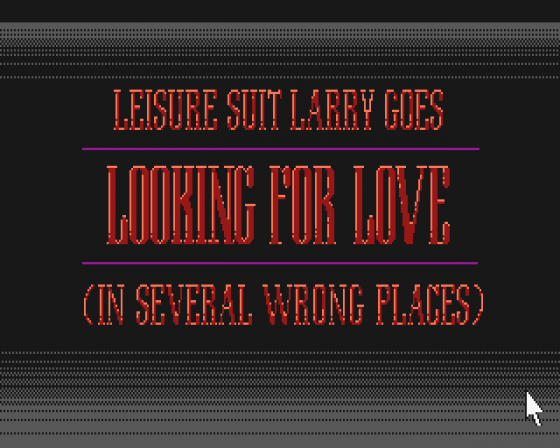 Welcome back, Larry! But it's not like you to be mowing somebody else's lawn! Oh, I get it - payment in kind, I suppose!

That lovable, loathable, randy little schmuck, would you believe, has shacked up with Eve, a girl from his Lounge Lizard days. Only trouble is, Eve knows nothing about it yet, so when she arrives home to find Larry installed, and calmly cutting her grass, she goes wild and Larry is sent packing, with nothing in his pockets save a dollar scavenged from a pair of Eve's old panties.

However, fortune is about to smile on Larry in the shape of a short-sighted receptionist at the TV studios. Cheat that he is, Larry manages to become a candidate for a Blind Date with Barbara Bimbo, a 'batchelorette' from Airhead, California (hobbies include tantalising elderly men; turn-offs include the aroma of resin core solder.) In a hilarious take off of the famous TV game, Larry wins a month's cruise in the company of this moronic female, and a million dollars a year for life. So off he goes to do some last minute shopping. 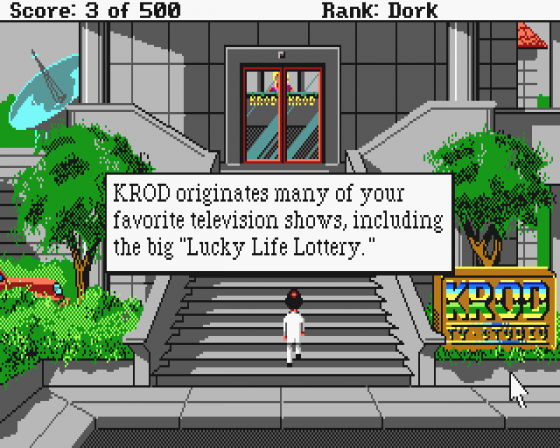 But Larry II isn't all fun and games. Larry is about to get involved in the evil machinations of arch-villain Dr Nonookie, whose secret base is the interior of an extinct volcano on a remote island. No prizes for guessing that the underlying theme is a spoof of Ian Fleming's Dr. No.

Now it so happens that by the time Larry joins the cruise, unbeknown to him, he is carrying some top secret microfiche film hidden in an antique Peruvian Onklunk. He'd been showing off again - this time by chatting up a Spanish girl in a music shop. His Spanish was so poor that the sentences he uttered, by sheer coincidence, were pre-arranged recognition code phrases. And, by even greater coincidence, the real spy is Larry's double!

The trouble with Larry is he tends to chase after anything in a skirt, and many a wink and a wiggle leads Larry to his doom under a travelling laser beam, at the hands of a whole series of Dr. Nonookie's lovely henchettes. Leave them alone, Larry, you know it makes sense! Thought you'd caught a live one by the pool, didn't you... and where did that lead? Yeah, the cold dip! And Larry, what are you doing with that bikini top stuffed in your pocket? 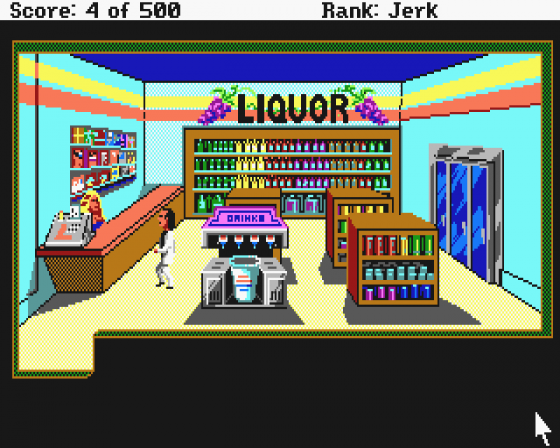 Larry soon has to make a hurried departure from the cruise, and after ten gruelling days drifting at sea, finds himself washed up on the sandy beach of a holiday isle. Good restaurants, smart hotel rooms, a nude beach, and a barbershop that does a special line in wax treatment are all within easy walking distance. But... so are the KGB, and it takes all Larry's cunning to avoid recognition, and to escape to the airport.

Ever stood in a queue at a Post Office? You're always waiting at the wrong counter, right? Well, it's like that for Larry at the airport check-in desk, and nothing short of a bomb will shift the queue that Larry decides to join! After a perilous flight, Larry finds himself in a jungle on Nonookie's island. Killer bees, an anaconda, deadly quicksands, and piranhas are hazards now facing Larry before he meets his true love, daughter of the local chief! There follows a love scene that is enough to bring tears to your eyes - tears of mirth!

Trouble is, before he will sanction a marriage, chiefy wants Larry to prove himself, first by writing a program in assembler, and then by defeating Nonookie, which he does in a stupendous finale that plays itself like a film. 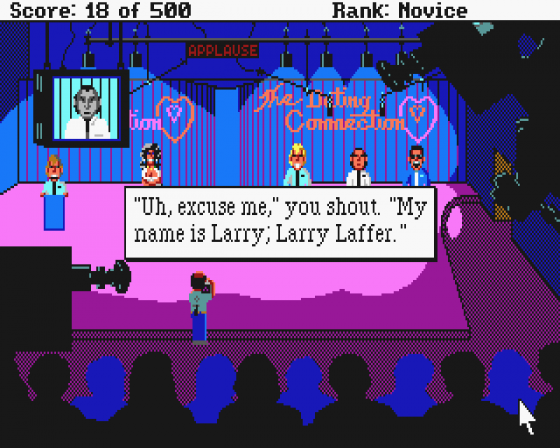 Sierra On-line have substantially upgraded their system since Larry's earlier appearance. Text windows now only contain far more, they look a whole lot smarter. Input text goes into a window that pops on to the screen as soon as any character key is pressed. The Save/Restore options are far more user friendly than the somewhat confusing ones of old.

But by far the biggest improvement comes in the graphics which are more detailed, with extensive animation, often even with incidental background animation, like a train running along a track in the distance, or a plane coming in to land, seen through an airport window. All this takes up storage space - the ST version comes on three disks, and they are double sided. The pictures do take a while to load, but this is alleviated by some clever picture caching in memory, eliminating disk loads when moving to locations recently visited.

The story itself, however, is less spicy than its predecessor. Larry does score once or twice (try it with the hotel maid!) but invariably it leads to his demise. A nice touch is a filth Level control, infinitely variable between Clean and Dirty, but even with this set to the Maximum Dirty, the game barely achieves a Leather Goddesses 'tame'.

The puzzles are mostly of the type where you have to get it wrong first, and then go back (often quite a long way) to get it right in hindsight. This means you *must* save regularly, and I would recommend pre-formatting at least a couple of disks, to save all the positions you are likely to need. Some of the puzzles are extremely obscure, although none are very complex. Whereas in, say, an Infocom adventure, the player would have to figure out the detailed steps to get through the mechanism of a puzzle, here it is often a matter of talking (in general) to the right person, at which point the computer takes over by assuming, correctly, exactly what Larry wants to say.

The old theme tune is back (I like it so much I always let it play itself out!) and there's a very haunting melody to accompany a couple of romantic interludes. Here, as in a few other parts of the game, fairly lengthy animated sequences are played out, during which the player simply sits back, watches and reads the accompanying text. And a word of warning the first time you play, make sure you don't hit a key whilst the titles are displaying or you will miss the lengthy animated introduction to the story - the title by-pass takes you straight into the story cold.

The animation is superb, and includes some hilarious sequences in which Larry, dressed in drag, unbelievably regains his balance when teetering on the edge of a cliffside path. And during the game, Larry himself can and will swim, dive and crawl at times, as well as having great fun under the bedclothes!

Larry II is a light-hearted romp of an adventure that tells a humorous story in a linear way. You get it right or you get it wrong, in a predetermined sequence. But more importantly, it is a superb piece of all-round entertainment, particularly, but not exclusively, suited to adventure players.

A superb piece of all-round entertainment, particularly, but not exclusively, suited to adventure players. 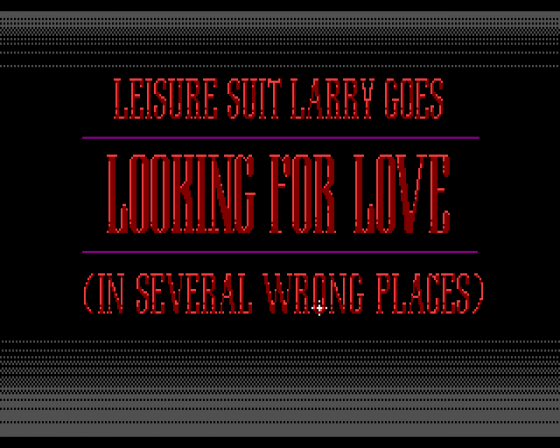 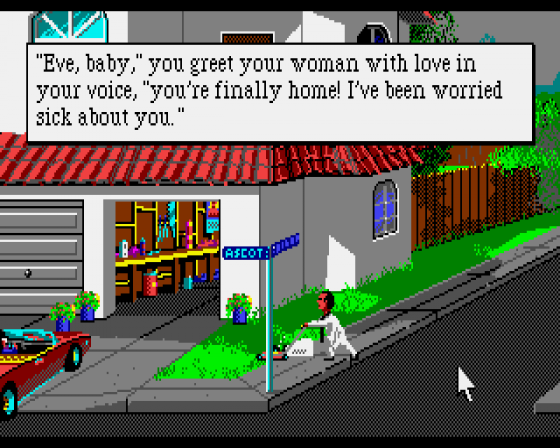 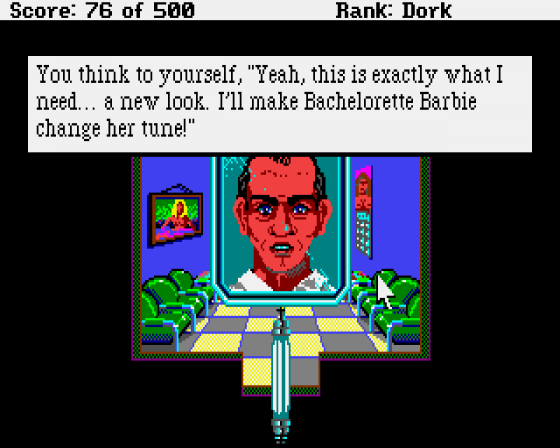 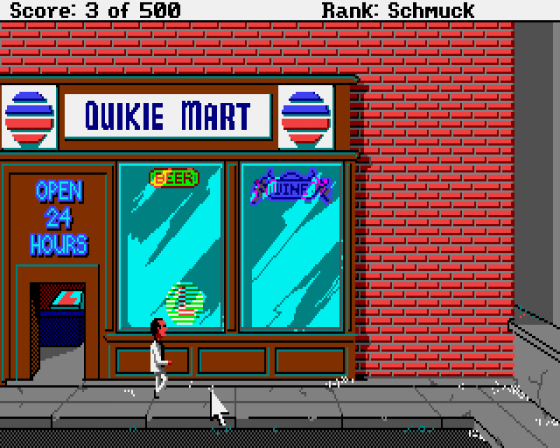 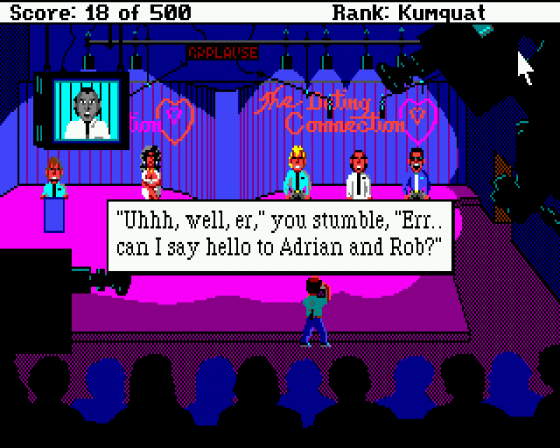