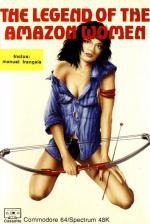 From the steamy jungles of Birmingham comes the Legend Of The Amazon Women. Or the Leg-End of the Amazon Women as it is affectionately known.

First the "plot". Lady Wilde and her daughter are the only survivors of a plane which has crashed in the Amazon jungle. But, on regaining consciousness, Lady Wilde finds her daughter has disappeared. Bravely she sets out to rescue her child who has fallen into the clutches of the Amazon women.

Against a scrolling jungle background - there are ten zones - Lady Wilde plods on with her club, duffing up the Amazons or, depending on your skill, getting duffed up.

Points are scored for hitting and defeating your opponents, dodging arrows, etc. Weapons available to the fighters at various stages of the game include clubs, swords and axes.

One intriguing thing is that Lady Wilde looks exactly the same as the Amazons except for a different coloured dress and lighter skin.