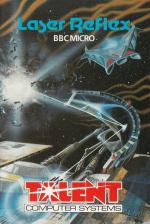 Novel twist against the najjers

You are in charge of a remote asteroid refuelling base whose silos contain millions of litres of liquid oxygen. These you must guard with your life - or more effectively with your powerful laser cannon - against the usual hoards of marauding najjers.

The novel twist in Laser Reflex from Talent Computer Systems is that your laser uses a mirror at the edge of the screen to angle the fire-power in any direction. You shoot at the mirror and the laser beam reflects at an angle dependent on the position of your base.

Your laser batteries need recharging after a few shots, meaning that you must stay at the far left of the screen for a while, thus ruining your long distance pot shots.

At the start of the game a shield protects the tops of the silos. This is soon rendered useless by constant bombard ment, leaving you alone to save the universe.

If any of the creatures get through they start to construct a system of pipes on the tops of the silos. When enough drones have got through to complete the piping you lose one of your three lives.

Your go is timed, though this is for your use only and plays no part in the game. The program keeps a record of the highest score but I found the starting value quite difficult to beat.

As you progress in the game the aliens get meaner, quicker and diversify into many strange forms.

The graphics are extremely impressive, especially the back ground scenario of the silos and piping. Unfortunately not enough attention has been paid to your own base which would be hard to distinguish but for its frequent movement.

The program is Electron compatible, so the sound is not up to BBC standards. I hope that this compatibility doesn't become common practice with software houses. After all the Beeb users were here first!

The documentation was extremely comprehensive, even telling me to connect my television and check that the Beeb is plugged in. As a security measure, the machine must be turned off and then on before the program is loaded or else it will crash when loading is complete.

This even applies if the system has only just been powered up. Pressing Break returns the programs to the title page, though if this is done repeatedly then the game doesn't run.

Too much effort has gone into brilliant but confusing graphics while too little has gone into the game itself, which is little more than turbo-charged Space Invaders.

Having said that, good luck Talent Systems. With the software around today you'll need it!

Other BBC Model B Game Reviews By Philip Tudor

Too much effort has gone into brilliant but confusing graphics while too little has gone into the game itself, which is little more than turbo-charged Space Invaders.