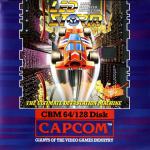 Ever since you were a piddling little space cadet in short skin-tight trousers and a latex balaclava hat, you've had one really special dream.

Remember those jerks who say you don't dream in colour - well, they're wrong. This dream comes in glorious MGM technicolour, in colours so bright and strong you'd have to be a blind pygmy hippo with a bucket over its head to miss 'em. It's big, it's red, it's got shiny black wheels, it goes like a dream and it's mega... no... *ultra* cool.

Or that's what you think.

Yeah well - one bright, sunny day, a fat fairy godmother with a big cheesy grin and horrible yellow teeth, comes lolloping into your life, hands you a half-eaten hamburger (no pinching), waves her wand, grabs the hamburger back, and lollops off - leaving a brand, spanking, shiny, fantastically trimmed, lean, clean firing machine in your life, it's even got furry dice.

Next thing you know, you're pitching your wits against the smoothest, coolest, least clean-shaven dudes in town in the LED Storm Sky City race. Brrrroooom!

As everybody worth their latex balaclava knows, this is the race of the season. Survive all nine vertically scrolling levels and you're a well-hard, mega-man with pots of money who never needs to spend another day parking cars in his life.

All you have to do is negotiate your fab machine across terrifying city terrain, coral reefs, precipitous mountain roads and devastatingly devious desert terrain.

If you wanna win (and boy, do you want to win!) you've got to make sure that you grab all the energy bonuses, fuel cannisters and invulnerability capsules and avoid all the juggernauts, pesky frogs (frogs?) that try to explode you, push you off the highway or slow you down. Oh yeah - and if you don't jump to avoid those gaps and canyons slap, bang in the middle of the track, you're dogmeat, right?

Yaay! Get into some leather, rip up the road and have a fabbo, triff 'n brill time.

This has to be one of the fastest, most unusual and dead addictive racing games I've seen in ages. The graphics really capture that sense of racing up the highways, overtaking everybody, shouting really naff things and not giving a monkey's whether anybody gets out of the way.

There are loads of clever little touches like having to waggle your joystick to get those croaking froggies off your bumper and the music on both versions (especially on the C64) is absolutely brill.

Unless you want to miss out on a stonking good time, get this now!

There I am, minding my own business and thinking things like "I wonder if the next Capcom conversion is going to be as good as Bionic Commando" and "I wonder what I'll have for tea" or "When are..." [Get on with it, Maff! - Ed] and that sort of stuff, when LED Storm comes along and I'm glued to my chair for a couple of hours 'cos I refuse to play anything else.

Both versions really capture the brilliant atmosphere of the coin-op, the sound just blows you away and the gameplay is more addictive than a crateful of cherry cokes on a dead hot day.

If you want to do yourself a favour, get this now!

If anyone out there's a Spy Hunter freak (like me!) then get on your running shoes and sprint down to your local software shop right away - this game is definitely for you.

It's not just incredibly playable - it's got loads and loads of extras (frogs, bullying juggernauts, canyons, energy pods) which give all that mega-playability an even more exciting edge.

The Amiga version's slightly more faithful to the coin-op but I've got a real soft spot for the C64. The full-sccreen parallax scrolling, really brilliant soundtrack and totally absorbing gameplay make this my fave game of the month.

Basically, whichever computer you've got, the message is this - do a headstand on a bed of nails rather than give this a miss.

Sound 94%
Amazing series of synthesised title, high-score and in-game tunes on both version.

Lastability 90%
There are nine levels so there's more than enough incentive to keep that joystick good and hot.

Overall 94%
Easily one of the most playable racing games ever, and a top quality conversion.

Easily one of the most playable racing games ever, and a top quality conversion.